The New Society of Control 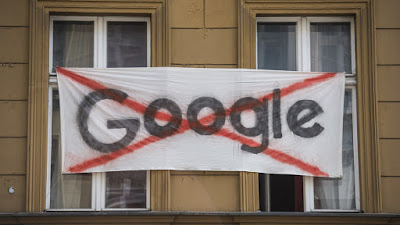 - Zizek on Google leak, "We are moving into a new, controlled society worse than old totalitarianism"

The intellectual told RT he’s not advocating for online anarchy, comparing it to snuff movies in hardcore pornography – some regulation should be in place to block harmful content on the internet, he says. But hiding political motives for suppressing voices online is what worries Zizek the most.

“We all know we have to censor things at some level, but the main rule for me is that the process should be transparent. Not in the way – I’m talking about the developed West – it is done now, when all of a sudden somebody is prohibited and you are not even allowed to debate it,” Zizek explains. The “false choice” between politically correct censorship and radical liberalism is a trap, he believes.

This week, conservative transparency group Project Veritas published documents it received from an ex-Google employee. The documents appeared to confirm that Google can boost or de-rank news sources based on a seemingly biased set of internal rules. Calling the practices “dark and nefarious” the whistleblower, Zachary Vorhies, also leaked a doc detailing Google’s “blacklist” that lists nearly 500 websites, including both conservative and leftist media outlets.

Zizek believes the Big Tech's practice of blacklists and shadow bans could prove an opportunity for right-wing activists to show themselves as a group fighting establishment politics and targeted for their opposition. The philosopher thinks this tactic will actually backfire against liberals by giving “the new populist right a position where they can say: you see, we’re the true alternative, we’re the true oppressed.”

Google is likely not the only tech megacorporation with a tight grip on their users’ digital menu, Zizek argues – but “the process isn’t some kind of a dark plot,” rather an inconspicuous slide “into a new, controlled society.”

What’s terrifying about it is that we don’t even experience it as something controlled. We just use social media, buy things, go to a doctor – and all the data about us is out there. But those are the things that we perceive as our freedom. So what we perceive as freedom becomes the very way we are controlled.

One doesn’t know anymore “if there is secret police following you or somebody reading your letters,” and this in Zizek’s mind is what differentiates it from the totalitarianism of the past. Modern control is hidden and undeclared, Zizek says.

So what else is new?

Been in the works since the advent of the Machine Age.

We began to hit the skids once the Marxian interpretation of "EQUALITY" began to supplant our recognition of, and our respect and longing for QUALITY..

Poverty, Vulgarity, Stupidity, Indolence, and Mediocrity have always been part of the human condition.

The Big Change for the Worse, however, came with Marx's falsely humanitarian determination to MANGIFY, GLORIFY, and SANCTIFY these undesirable elements in our collective character. Since then the Coarse, Cheap, Crude, Indecent, Moronic, and passionately Iconocastic and Destructive have become increasingly aggressive militant and more powerful to what-is-now a terrify8ng degree.

I found it humorous that Zizek thought that being "oppressed" was the Left's "advantage" and fears that the Right can now claim the title.

Where did he say that?

But the Right in the role of the "oppressed"? In the US they've been claiming that for like forever, see the claim of the 'liberal biased MSM', despite Fox Noise being the largest cable news provider (at least by their own admission)

The philosopher thinks this tactic will actually backfire against liberals by giving “the new populist right a position where they can say: you see, we’re the true alternative, we’re the true oppressed."

Yes, with the Right in the role of the oppressed.

And yes, the Right has been trying to out-whine the Left as the "truly oppressed" for years.

Whenever Leftists come to play
Bonhomie shrin then goes away.

RT is getting a little obsessed with this alleged anti-Conservative bias by Google/Twitter/FB.

Personally I'd like to see some ironclad evidence of it, not just righteous whining, hearsay and hand wavy arguments.

I have no problem in finding Conservative viewpoints in the 'evil trio'.

Anyroads, seems we have a situation where Conservative bakers can refuse to bake 'gay cakes' but G/Tw/FB must be denied the right to ranking Conservative VPs a little lower than 'liberal' ones! Wah, no fair!

He is the chosen one!

WHOOPS! I forgot to mention FrANZ KAFKA one of the greatest masters of nightmarish dystopian "prophecy" [I no longer call it "fiction" for what-should-be obvious reasons].

There is nothing NEW about Government's inherent tendency to tyrannize or bureaucracies' infinote capacity to frustrate, balk,squelch, and deny anything resmbling true progress.

Art is alway far ahead of the curve, but that has no more value to human society than the prophecies of Cassandra who suffered terribly from being CORRECT while no one BELIEVED her.

Humanity, it seems, aways has to learn whatever it needs most to learn the HARD WAY.

I think that Kafka learned ALL about his beloved "Socialism" on his deathbed writing "The Hunger Artist". ;)