On the Lacanian Gaze 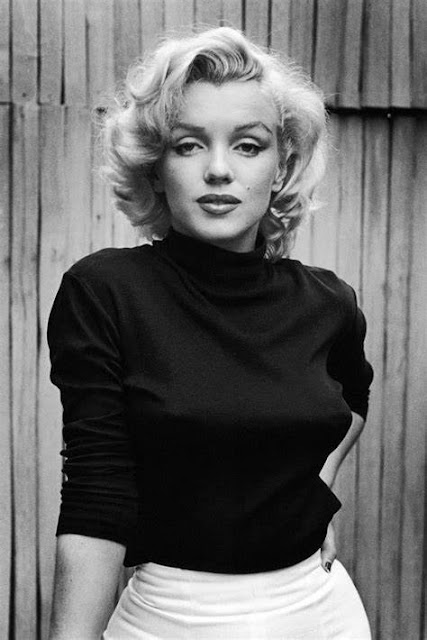 -Slavoj Zizek, "Marilyn Monroe & some thoughts on the Lacanian gaze"


Unfortunately, the Laura Mulvey 'male gaze'*1 distortion of the Lacanian/Sartrean gaze is the most well known among laymen. But it fails to capture a fascinating issue in modern psychoanalysis: to what extent have psychoanalysis and folk versions of psychoanalysis changed the libidinal structure of people. Surely, the very way our societies in the popular media discuss the structure of the mind that it is fair to say we now have, through self-conscious reflection, jungian anxieties and kleinian reactions etc. So it would surely be as certain to say feminism will inject its ideas into the romantic flirtation and change it. Let's look at the Lacanian gaze to understand this.

Marilyn Monroe offers up a vignette to help us:

'concept is deployed politically to defend at the level of personal affect, where the “male gaze” can come to refer to a fantasy of an all-powerful gaze that punishes and torments: a gaze, I suggest, that metonymically comes to stand in for a ferocious primal father...'

Hence, the tendency to only think of the gaze in terms of Foucaldian power relations (a man's gaze is power over the woman and nothing more).

somewhat tellingly while Mulvey’s essay articulates the structure of an eroticized gaze—a male viewing position structured on a woman as the object of desire—it does little to address the position of the one “caught” in this gaze, or to use psychoanalysis to understand what is at stake when one is the object of a gaze.

to ask the question of one’s desire is, many might argue, precisely what generates feminist inquiry and in this, feminist protest and questioning has been equated with the discourse of the hysteric. Indeed, the fundamental question at the heart of second wave feminism animates the hysteric’s ultimate question:

what is a woman?

The results of a properly feminist questioning would appear, at least in some expressions of post-feminist culture, to have resulted in a world dominated by feminist ideas. At the institutional level feminist knowledge is implicated in a range of social, political, and regulatory structures and processes. Perhaps more obviously, spectacles of female agency and desire are promoted among other imperatives to enjoy in neoliberal cultures of self-promotion. Yet, as many cultural theorists suggest, expressions of post-feminism (depending on how one defines the ‘post’) always operate—somewhat like Monroe—in a double movement between traditional articulations of femininity and feminism. Which is to say, that when one speaks from a feminist position of knowledge, the feminine question is expressed beneath the bar, and as Lacan notes, “as soon as you ask the question ‘What does a woman want?’ you locate the question at the level of desire, and everyone knows that, for woman, to locate the question at the level of desire is to question the hysteric.” That is, where the theory is mobilized in this way that places so much emphasis on the master’s desire (at the expense of a woman’s), it might be said to be an expression of hysterical discourse. I have previously argued that feminist discourses—as a form of hysterical protest—have bypassed the analyst’s discourse and moved into the university discourse where feminist knowledge production is taken as truth; here feminism’s knowledge product can intervene into the subject’s affective reality and provide a (seemingly legitimate) name for affect. But in doing so, I suggest, it Feminism as a signifier—of identity, knowledge, and universal truth— not only intervenes into the subject’s affects but defends against them and obstruct efforts towards (self) analysis.

In Lacan's gaze, we understand that the gaze provokes anxiety in the woman and is heavily involved in her libidinal desires. The movie, Black Swan, in dealing with the elegant art of ballet, and its covering over of the base eroticism of the woman's body with the beautiful aesthetic of dance:

... animates the anxiety triggered by the Real encountered in Lacan’s seminar X, where anxiety is felt in the gaze that signals what has been repressed. Feminist responses to the film’s articulation of this gaze functions to both deflect politically what is felt personally regarding the gaze.

Feminism becomes part of the libidinal structure of women inculcated by feminism:

I suggest, Black Swan metaphorises the problem of the gaze for the feminine subject where there is an excessive (moral) force or defence against it. For a woman, feminism may provide a defence against anxiety invoked in the gaze—whether metaphorically animated in film or popular culture, real experience, or both.

This can be seen with feminist critic responses to the movie:

'feminist critics such as Jacobs reacted at a political (feminist theoretical) level with the personal disgust of Nina in the film when confronted with the eroticism signaled in the gaze of the Other. This particular deployment works, I suggest, to defend against the problem of the Other’s gaze: specifically, the anxiety induced when caught in the gaze of the Other that is a reminder of the (Real) sexual realm so keenly reduced to social convention within feminist discourse and just as adamantly repressed...'

This strange tension between the acceptable (Lacanian university) discourse on women's desires and the hidden desires is plain to see in all the constant antagonisms in the media culture wars.

*1 In the heavily cited and rather unhelpful “Visual Pleasure and Narrative Cinema”.

If she hadn't been so extraordinarily good looking in that nubile-but-sweet-little-girl-way she had, –– the innocent seductress –– she might have had a rasonably happy, fulfilled life as a wife and mother.

I've seen her first husband, James Dougherty, a Los Angees policeman, interviewed –– just a plain, ordinary, nice, decent guy –– a little too old for her, perhaps –– but of all her "relationships" I could tell from the way he spoke of their time together that he was the only one in her whole life who truly loved her.

Ironically, the proof of that came with his willngness to let her go, when she got bitten, then fatally infected by the Bitch Goddess we call Fame.

Because of that her life was a genuine tragedy.

FYI: James Dougherty lived to be 84, and died of a form of leukemia.

He was broken-hearted wen Marilyn divorced him, but went on tyo marry two more times, had three children, and led a distinguished career as a member of the L.A. Police Dept. where he became the first to come up with and developed the idea of using SWAT teams.

Yes, he did –– and far more successful than poor Marilyn's even though she achieve fame and fortune. Whether the pills and booze that killed her –– at the tender age of thirty-six! –– were administered by herself, –– or a possible murderer ––, doesn't really matter. The ultimate cause of her premature death was her own poor judgment and lack of wisdom.

She was only sixteen when she married Dougherty, but I've never doubted an instant that she would have been better off if she' stayed wit, and they'd grown old together ––as he had wished.

If you stop to think for a moment the story is a lot like Dorothy's visit to Oz. The girl, herself, said that Oz was "beautiful," but when push came to show sh was terribly glad to be back in dreary old Kansas with her Auntie Em and Uncle Henry again.

Sadly for Marilyn, she had no chance to leave Oz once she got there.

In a very real sense Norma Jean Baker's story is a poignant parable illustrating in stark terms the vast difference between real and meretricious values.

One mor thught about The Ultimate Blnde:

In one of her movies "There's o Business Like Show Business" which starred Ethel Merman, Dan Dailey, Mitzi Gaynor, Johnny Ray, Donald O'Connor and herself, Marilyn sang this song:

"After You get What you Want You Don't Want It."

That turned out to be sadly prophetic in her case, didn't it? But one on the Road to Hell there was no trning back.