Heard through the Grapevine Today... 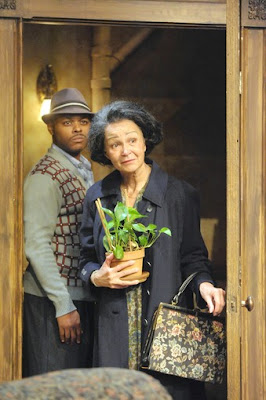 What happens to a dream deferred?

Or does it explode?
-Langston Hughes

from the Baltimore Sun

The fall theater season is just beginning, but the Everyman Theatre production of "A Raisin in the Sun" surely will qualify as one of its highlights. African-American playwright Lorraine Hansberry's 1959 classic is a period piece with timeless appeal.

It is really brought alive by an excellent cast that makes you feel as if you are witnessing social conditions in segregation-era Chicago in the 1950s. You feel grounded even before the first word of dialogue.

Set designer James Fouchard is quite a carpenter, because his construction of a faded but well-maintained apartment is so persuasive that it's not surprising when one of the characters actually makes scrambled eggs on the kitchen stove.

When family members talk about the dismal view through that kitchen window, the emotional effect admittedly is somewhat marred by lighting designer Jay A. Herzog's habit of having stage lights glaringly reflected in the apartment windows. A badly bungled lighting cue in a bedroom scene doesn't help matters, either.

It's worth making a note of such shortcomings, because they're so out of keeping with what otherwise qualifies as a triumph of set construction and period-suitable furnishings. Just as Hansberry constructed a play in which even the small talk has big implications, everything you see on stage places you within the world inhabited by the Younger family.

You feel secure as you survey this set and then get to meet the individual family members. "A Raisin in the Sun" has such fully three-dimensional characters that every family member completely holds your attention. Although the story indicates that Walter Lee Younger should qualify as the main character, it somehow would not seem right to thereby state that other family members are less crucial to the plot.

Seeing various productions of "A Raisin in the Sun" over the decades also serves as a reminder that the casting of a specific production can pull your attention — and your sympathy — to various family members.

As Walter Lee, KenYatta Rogers embodies the frustration of a young black man whose job as a chauffeur for white clients symbolically means he'll always be driving for somebody else.

Although Rogers certainly makes you feel that frustration, the most powerful emotional charge in this production comes from Dawn Ursula as Walter Lee's wife, Ruth, who quietly works as a maid for white families and yet who is not afraid to speak up when it's called for. Ursula, who has given many fine performances in local theater, has such a wonderfully expressive face that she anchors this production.

Also no slouch when it comes to being expressive are Fatima Quander as Walter Lee's outspoken sister, Beneatha, who is a college student hoping to go to medical school; and Walter Lee and Beneatha's recently widowed mother, Lena (Lizan Mitchell), in whose long-occupied apartment everybody still dwells.

The socially pointed plot involves Lena awaiting a life insurance-related check that may change the family's fortunes. Individual family members have very different notions about where that money should be spent; and secondary characters also get to offer their opinions about how a black family can achieve upward mobility in a racially divided society.

I would have thought that the PETA Conservatives would have been celebrating?!

Both masculinity and blood sports are dying.

What the heck is a PETA conservative?

We'll always have the scrapyard pickings

We'll always have the scrapyard pickings...

I know, the Germans wore grey, you wore blue...

The only think I'd say was "non-conservative" in Santorum's efforts is the attempt to create regulations that went beyond their mandate and intent. It's definitely a state-level issue.

For the record, I helped vote down Missouri's vague "puppy mill" law that would have given cops "probable cause" to search your home and property for anything if they heard a dog bark when they passed your house.

If that's the most "non-conservative" thing about Rick Santorum, I'll still take him over Rick "let me force my lobbyist's drugs into your kids veins" Perry or Michelle "government stimulus plans stabilize commodity prices" Bachmann or Ron "we need Dennis Kucinich's proposed federal department to indoctrinate kids for 'peace'" Paul or Herman "your free speech and religious affiliations are not licensed by the 'community'" Cain.

Santorum will probably be out of the running by November this year, and the Tea Party "movement's" pursuit of having no candidates on the ballots more conservative than Obama will be complete.

I wonder if the US Government would sell us Johnston Atoll and let us form our own little Pacific island nation...

Yes, I remember every detail... but then I wouldn't really mind a Santorum candidacy. But I won't support an establishment GOP OR DNC pick. All their riders ride the same horse... even Hillary. Obama was an "outsider". And our NEXT president will be an outsider, as well.

I wonder if the US Government would sell us Johnston Atoll and let us form our own little Pacific island nation...

lol! They dismantled my favorite chemical demil facility there recently. Of course the radiation from the atomic tests would certainly help one acquire that "deep suntan" look...

Where is the Tea Party-approved Democrat primary challenger to Obama anyway?

Randall Terry is the "conservative" candidate? Who knew?

play the vid in the upper Left.

Ooops...maybe YOU should watch the one in the upper right. ;)

One problem though. I wouldn't feel comfortable with my MENSA membership if word got out I voted for a Democrat.

I knew that sooner or later la corrida would be banned.

Beamish, the bullfight was never very important in Catalonia. This doesn't change much.

You can still set fire to small animals in any event.

Next you'll tell me you support Catalan separatism.

Ducky still hasn't gotten over the communist loss to Franco.

To fling my arms wide
In some place of the sun,
To whirl and to dance
Till the white day is done.
Then rest at cool evening
Beneath a tall tree
While night comes on gently,
Dark like me-
That is my dream!

To fling my arms wide
In the face of the sun,
Dance! Whirl! Whirl!
Till the quick day is done.
Rest at pale evening...
A tall, slim tree...
Night coming tenderly
Black like me.

Sounds like someone preoccupied with race instead of humanity, Sue. Is THAT your kind of literature... tales of resentment?

The night is beautiful,
So the faces of my people.

The stars are beautiful,
So the eyes of my people

Somehow, I do not feel "included". Somehow I don't think that Hughes intended that I do. And that's sad.

Even his expressed optimism for a "united" future for the races is laced with bitter resentment.

-FJ - I wanted to know if you were familiar with Dream Variations because the last line of the poem has further significance - which you may or may not be aware of.

I will check back and if you are interested in what that significance is I will be more than happy to share it with you.

For I see but two variations upon a dream, and neither would appear to be deliberately "inclusive".

Revolt! Arise!
The Black
And White World
Shall be one!
The Worker's World!
The past is done!
A new dream flames
Against the
Sun!

The new "Workers World" slave planet sounds like Hell to me.

Legion aka Speedy G - When I said I wanted to further discuss Dream Variations, I was talking to -FJ.

Are you also -FJ?

I'm all the links on my sidebar, and more.

Legion, -Fj and Speedy - and whoever the hell you guys are.

For the last and FINAL time, are you interested in knowing what I have to say about Dreams Variation.

And no fooling around. You have to be sincere.

I'm very intuitive and I'll know if you are jacking around with me.

I think she's getting a little impatient there FJ. At this point you probably realize you're supposed to keep your mouth shut and just nod your head OR not. Either way if you're anything like me Sue won't be the last time we disappoint a woman- especially a demanding one.

There are demanding women and charming ones. I like it when the two travel together. ;)

-FJ - and you too EB, I can be charming and I can be demanding. What ever is required of me.

but the truth is I like men that are real.

You had your chance to be enlightened about that.

We're on the internet using pseudonyms and avatars. I suggest the local bar or some such then.

Well, teach her to be charming, Sue. That way she'll know how to manage a real man. ;)

I'm not looking for a demanding woman. So I'll pass.

Can I offer you some cheese to go with your whine?

A charming woman is NEVER obnoxious in making her demands known... so therefore, they will be met. A demanding woman, on the other hand, only succeeds in making herself avoided and/or ignored.

Oh, Yeah? Well for your information the third house we looked at was the house of my dreams.

A HUGE fenced in backkyard for the grandchildren, enough rooms for everything I need to complete the remaining years of my demanding life.

Someone must like me - so put that in your pipe (or should I say bong) and smoke it.

Just remember, somebody is going to have to dust and vacuum those rooms... When I retire, I'm going to buy Ted Kazinski's cabin....

Glad to hear you found something suitable. Enjoy it!

Mmmm. Speedy, I hadn't thought of that.

I didn't know it was up for sale. Just you and the grizzlies out there - and they are legion.