Ate, Between Two Deaths - Visions of the Apocalypse

"And Caesar's spirit, ranging for revenge,
With Atë' by his side come hot from Hell,
Shall in these confines with a monarch's voice
Cry "Havoc!" and let slip the dogs of war, ...


At first sight, then, Benjamin is in perfect accord with Stalinism concerning this 'perspective of the Last Judgement': but here we should follow the same advice as with 'love at first sight': take a second look. If we do it, it soon becomes clear how this apparent proximity only confirms that Benjamin has touched the real nerve of the Stalinist symbolic edifice - he was the only one to question radically the very idea of 'progress' implied by the accountancy of the big Other of history and - precursor, in this respect, of the famous Lacanian formula that development 'is nothing but a hypothesis of domination' - to demonstrate the uninterrupted connection between progress and domination: 'The concept of the historical progress of mankind cannot be sundered from the concept of its progression through a homogeneous, empty time' (Thesis XIII) - that is, from the temporality of the ruling class.

The Stalinist perspective is that of a victor whose final triumph is guaranteed in advance by the 'objective necessity of history'; which is why, in spite of the accent on ruptures, leaps. revolutions, his view on past history is evolutionary throughout. History is conceived as the continuous process of replacing old masters with new: each victor played a 'progressive role' in his time, then lost his purpose because of unavoidable development: yesterday, it was the capitalist who acted in accordance with the necessity of progress; today it's our turn... In Stalinist accountancy, 'objective guilt' (or contribution) is measured by the laws of historical development - of continuous evolution towards the Supreme Good (Communism). With Benjamin, in contrast, the 'perspective of the Last Judgement' is the perspective of those who have paid the price for a series of great historical triumphs; the perspective of those who had to fail, to miss their aim, so that the series of great historical deeds could be accomplished; the perspective of hopes deceived, of all that have left in the text of history nothing but scattered, anonymous, meaningless traces on the margin of deeds whose 'historical greatness' was attested to by the 'objective' gaze of official historiography.

This is why, for Benjamin, revolution is not part of a continuous historical evolution but, on the contrary, a moment of 'stasis' when the continuity is broken, when the texture of previous history, that of the winners, is annihilated, and when, retroactively, through the success of the revolution, each abortive act, each slip, each past failed attempt which functioned in the reigning text as an empty and meaningless trace, will be 'redeemed', will receive its signification. In this sense, revolution is strictly a creationist act, a radical intrusion of the 'death drive': erasure of the reigning Text, creation ex nihilo of a new Text by means of which the stifled past 'will have been'.

To refer to the Lacanian reading of Antigone: if the Stalinist perspective is that of Creon, the perspective of the Supreme Good assuming the shape of the Common Good of the State, the perspective of Benjamin is that of Antigone - for Benjamin, revolution is an affair of life or death; more precisely: of the second, symbolic death. The alternative opened up by the revolution is that between redemption, which will retroactively confer meaning on the 'scum of history' (to use this Stalinist expression) - on what was excluded from the continuity of Progress - and the apocalypse (its defeat), where even the dead will again be lost and will suffer a second death: 'even the dead will not be safe from the enemy if he wins' (Thesis VI).

We can thus conceive the opposition between Stalinism and Benjamin as that between evolutionary idealism and creationist materialism. In his Seminar on The Ethic of Psychoanalysis, Lacan pointed out how the ideology of evolutionism always implies a belief in a Supreme Good, in a final Goal of evolution which guides its course from the very beginning. In other words, it always implies a hidden, disavowed teleology, whereas materialism is laways creationist - it always includes a retroactive movement: the final Goal is not inscribed in the beginning; things receive their meaning afterwards; the sudden creation of an Order confers backward signification on to the preceding Chaos. 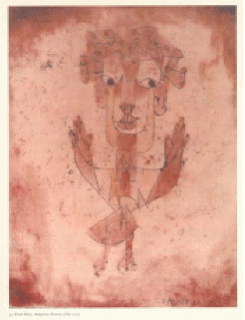 A Klee painting named Angelus Novus shows an angel looking as though he is about to move away from something he is fixedly contemplating. His eyes are staring, his mouth is open, his wings are spread. This is how one pictures the angel of history. His face is turned toward the past. Where we perceive a chain of events, he sees one single catastrophe which keeps piling wreckage upon wreckage and hurls it in front of his feet. The angel would like to stay, awaken the dead, and make whole what has been smashed. But a storm is blowing from Paradise; it has got caught in his wings with such violence that the angel can no longer close them. The storm irresistibly propels him into the future to which his back is turned, while the pile of debris before him grows skyward. This storm is what we call progress.

Could it be an accident that Klee's "angel," which more closely resembles a demon to my Christian eye, appears to have the face of a DOG?

Walter Benjamin, may have been intelligent, but -- like ALL members of The Frankfurt School -- his perception of Reality was hideously warped by the distorted prism of his heritage and upbringing.

He was a committed Marxist, and therefore, an utter failure at the Art of Living, and, apparently, at the art of being a human being. He committed suicide while in his forties.

NOT someone who observations I would want to make an integral part of my own Weltanschauung.

I should side w/Stalin, instead?

Here is one "why" I agree with Benjamin, that history is not "evolutionary", but a moment of "stasis" when the narrative descriptive of the current historical continuity is broken... a "Black Swan" event, so to speak, that later receives its' name (Name-of-the-Father) "after the fact"...

As Zizek says in "The Sublime Object of Ideology", The Lacanian definition of democracy would then be: a sociopolitical order in which the People do not exist - do not exist as a unity, embodied in their unique representative. That is why the basic feature of the democratic order is that the place of Power is, by necessity of its structure, an empty place. In a democratic order, sovereinty lies in the People - but what is the People if not, precisely, the collection of the subjects of power? Here we have the same paradox as that of natural language which is at the same time the ultimate, the highest metalanguage. Because the People cannot immediately govern themselves, the place of Power must always remain an empty place; any person occupying it can only do so temporarily, as a kind of surrogate, a substitute for the real-impossible sovereign - 'nobody can rule innocently' as Saint-Just puts it. And in totalitarianism, the Party becomes again the very subject who, being the immediate embodiment of the People, CAN rule innocently. It is not by accident that the real-socialist countries call themselves 'people's democracies' - here, finally, 'the People' exist again.

It is against the background of this emptying of the place of Power that we can measure the break introduced by the 'democratic invention' (Lefort) in the history of institutions: 'democratic society' could be determined as a society whose institutional structure includes, as a part of its 'normal', 'regular' reproduction, the moment of dissolution of the socio-symbolic bond, the moment od irruption of the Real: elections. Lefort interprets elections (those of the 'formal', 'bourgeois' democracy) as an act of symbolic dissolution of the social edifice: their crucial feature is the one that is usually made target for Marxist criticism of 'formal democracy' - the fact that we take part as abstract citizens, atomized individuals, reduced to pure Ones without further qualifications.

At the moment of election, the whole hierarchical network of social relations is in a way suspended, put in parenthesis; 'society' as an organic unity ceases to exist, it changes into a collection of atomized individuals, of abstract units, and the result depends on a purely quantitative mechanism of counting, ultimately on a stochastic process: ..... determines the general orientation of the county's politics over the next few years... in vain do we conceal this thoroughly 'irrational' character of what we call 'formal democracy': at the moment of an election, the society is delivered to a stochastic process. Only the acceptance of such a risk, only such a readiness to hand over one's fate to 'irrational' hazard, renders 'democracy' possible....

Temple of Love (Sisters of Mercy)

Life is short and love is always over in the morning,
Black wind carry me far away

You had me going for a minute, though. I was expecting Leonard Cohen.