The 'Nature' of Zeus Gift to Mankind

The Greeks believed that fire was a gift from the god Prometheus, who wanted them to have something to make them superior to animals. However, humans had to pay for the actions of Prometheus. In an effort to make life better for mankind he placed Zeus' wrath upon them and with this came suffering. Therefore, Prometheus was responsible for the troubles which still plague the Earth. 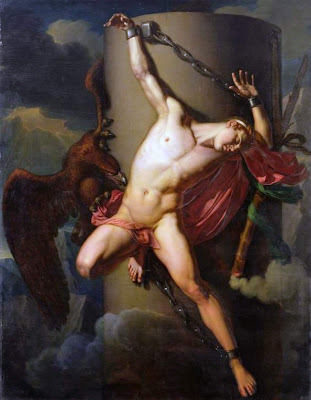 Zeus! Zeus, whate'er He be,
If this name He love to hear
This He shall be called of me.
Searching earth and sea and air
Refuge nowhere can I find
Save Him only, if my mind
Will cast off before it die
The burden of this vanity.
One there was who reigned of old,
Big with wrath to brave and blast,
Lo, his name is no more told!
And who followed met at last
His Third-thrower, and is gone.
Only they whose hearts have known
Zeus, the Conqueror and the Friend,
They shall win their vision's end;
Zeus the Guide, who made man turn
Thought-ward, Zeus, who did ordain
Man by Suffering shall Learn.
So the heart of him, again
Aching with remembered pain,
Bleeds and sleepeth not, until
Wisdom comes against his will.
'Tis the gift of One by strife
Lifted to the throne of life.


The trilogy of the Oresteia, of which this play is the first part, centres on the old and everlastingly unsolved problem of

The ancient blinded vengeance and the wrong that amendeth wrong.

Every wrong is justly punished; yet, as the world goes, every punishment becomes a new wrong, calling for fresh vengeance. And more; every wrong turns out to be itself rooted in some wrong of old. It is never gratuitous, never untempted by the working of Peitho (Persuasion), never merely wicked. The Oresteia first shows the cycle of crime punished by crime which must be repunished, and then seeks for some gleam of escape, some breaking of the endless chain of "evil duty." In the old order of earth and heaven there was no such escape. Each blow called for the return blow and must do so ad infinitum. But, according to Aeschylus, there is a new Ruler now in heaven, one who has both sinned and suffered and thereby grown wise. He is Zeus the Third Power, Zeus the Saviour, and his gift to mankind is the ability through suffering to Learn.

- Gilbert Murray, Preface to his translation of Aeschylus' "Agamemnon"

None of these dreadful chain reactions and transgenerational blood feuds would ever occur if only people could believe –– and accept –– this fundamental Truth of Being: "Vengeance belongs [only] to God."

You may see the movie version on YouTube at this link:

Like its ancient Greek prototype Oneill's play is a stark tragedy –– a relentless unfolding of one grim, bitterly disheartening event after another with no discernible trace of comic relief.

Rosalind Russell, Katina Paxinou, Leo Genn, Michael Redgrave, Kirk Douglas and allther members of the cast are superb in their roles, but the tone throughout is unfailingly lugubrious.

Humans have an unquenchable desire to find "Someone" –– or "Something" –– ANYTHING apart from THEMSELVES –– to BLAME for the presence of Trouble, Grief, Misfortune, Calamity, Disasters natural and otherwise, and so they dreamt up figures like:

How many figures from other cultures were used to "explain" the presence of evil and undue challenges in our lives?

The fault, dear Brutus, is not in our STARS, but in OURSELVES."