We Need a NWO 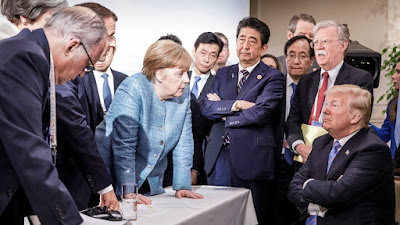 While most other western leaders fiddle and seethe, Donald Trump powers ahead as bully-in-chief. A genuine new world order is the only way to stop him.

Trump’s impulsive decisions, such as his refusal to endorse the G7 declaration agreed upon in Quebec, are not just expressions of his personal quirks. Instead, they are reactions to the end of an era in the global economic system, reactions which are sustained by an incorrect understanding of what is happening. However, Trump’s misguided vision is nonetheless based on the correct insight that the existing global system no longer works.

An economic cycle is coming to an end, a cycle which began in the early 1970s, the time when what Yanis Varoufakis calls the “Global Minotaur” was born, the monstrous engine that was running the world economy from the early 1980s to 2008. The late 1960s and the early 1970s were not just significant for the oil crisis and stagflation; Nixon’s decision to abandon the gold standard for the US dollar was the sign of a much more radical shift in the basic functioning of the capitalist system.

Indeed, by the end of the 1960’s, the US economy was no longer able to continue the recycling of its surpluses to Europe and Asia because its surpluses had mutated into deficits. As a result, in 1971, the US government responded to this decline with an audacious strategic move: instead of tackling the nation’s burgeoning deficits, it decided to do the opposite, to boost deficits.

And who would pay for them? The rest of the world!

How? By means of a permanent transfer of capital that rushed ceaselessly across the two great oceans to finance America’s deficits. And these deficits thus started to operate “like a giant vacuum cleaner, absorbing other people’s surplus goods and capital.

While that ‘arrangement’ was the embodiment of the grossest imbalance imaginable at a planetary scale, nonetheless, it did give rise to something resembling global balance; an international system of rapidly accelerating asymmetrical financial and trade flows capable of providing a semblance of stability and steady growth.

Powered by these deficits, the world’s leading surplus economies (e.g. Germany, Japan and, later, China) kept churning out the goods while America absorbed them. Almost 70% of the profits made globally by these countries were then transferred back to the United States, in the form of capital flows to Wall Street. And what did Wall Street do with it? It turned these capital inflows into direct investments, shares, new financial instruments, new and old forms of loans etc,” as Varoufakis noted in "Global Minotaur."

This growing negative trade balance demonstrates that the US is the non-productive predator: in past decades, it had to suck up a 1 billion dollars daily influx from other nations to buy for its consumption and is, as such, the universal Keynesian consumer that keeps the world economy running. (So much for the anti-Keynesian economic ideology that seems to predominate today!)

This influx, which is effectively like the tithe paid to Rome in Antiquity (or the gifts sacrificed to Minotaur by Ancient Greeks), relies on a complex economic mechanism: the US is "trusted” as the safe and stable center, so that all others, from the oil producing Arab countries to Western Europe and Japan, and now even China, invest their surplus profits in the US.

Since this “trust” is primarily ideological and military, not economic, the problem for the US is how to justify its imperial role – and it manages this through a permanent state of war.

For this reason, it had to invent the “War on Terror,” offering itself as the universal protector of all other “normal” (as opposed to “rogue”) states. Thus the entire globe tends to function as a universal Sparta with its three classes, now emerging as the First, Second, Third world: (1) the US as the military-political-ideological power; (2) Europe and parts of Asia and Latin America as the industrial-manufacturing region (crucial here are Germany and Japan, long the world's leading exporters, plus, of course, now the rising China); (3) the undeveloped rest, today's helots, those “left behind.” In other words, global capitalism brought about a new general trend to oligarchy, masked as the celebration of the diversity of cultures: equality and universalism are more and more disappearing as actual political principles.

From 2008 on, this neo-Spartan world system is breaking down. In Obama years, Paul Bernanke, the Chairman of the Federal Reserve, gave another breath of life to this system: ruthlessly exploiting the fact that the US dollar is the global currency, he financed imports by massively printing money.

However, Trump has decided to approach the problem in a different way: ignoring the delicate balance of the global system, he focused on elements which may be presented as “injustice” for the US: gigantic imports are reducing domestic jobs, etc. But what he decries as “injustice” is part of a system which profited the US: the Americans were effectively “robbing” the world by importing stuff and paying for it by debts and printing money.

No wonder Trump addresses Kim Yong-un in far more friendlier terms than his big Western allies: here also, extremes meet. With the disintegration of the system that dominated world trade from 1970, the US is increasingly becoming the disruptor of world trade. In contrast to 1945, the world doesn't need the US, it is the US which needs the world. Two outcasts are thus meeting in Singapore: the excluded outcast (Kim) and the outcast in the very fulcrum of the system.

Trump’s goal is to make trade deals with single partners who can all be blackmailed into submission, so it is of utmost importance that Europe acts as a unified economic and political force. Full of dangers as this new situation is, it opens up a unique chance for Europe: to engage itself in the formation of a new global economic system that will no longer be dominated by US dollar as the global currency.

In global economic terms, it’s war, so it’s time for radical measures. Europe should be aware that there is no return to the status quo.

Instead, a truly new world order is needed for Trump to get his comeuppance. And it is here that the response of EU members and Canada is insufficient: instead of advocating a new vision, they act as an offended party complaining that the US broke the established rules.

Thus, in the last decade or so, the EU more and more acts like the PLO ex-leader Yasser Arafat: about whom it was said that he never missed an opportunity to miss an opportunity.

As the immigrant crisis and Catalonia, among other events prove, it’s probable that Europe will again miss the chance.

Email ThisBlogThis!Share to TwitterShare to FacebookShare to Pinterest
Labels: Zizek

Anyone who wants to "STOP TRUMP" at this point is an ASSHOLE.

Why entertain this incredibly stupid CRAP?

You're fast becoming just another pawn in the vast army of Nattering Nabobs of Negativism.

Are you, perhaps, trying to lure the Philo-Semitic Belgian-British Beast whose name rhymes with DIRT back into the fold?

The noxious earworm ithat haunts us night and day is endless chlmatter about The Mueller Witch Hunt –– a despicable, totally dishonest tactic created, promoted by evil, power-mad men and endlessly trumpeted round the clock every day ever since it became evident that Mr. Trump COULD win the election. This nucleus of a deadly form of THOUGHT CANCER only INTENSIFIED then METASTASIZED as soon as he DID win supposedly against all odds.

We've heard about little –– almost NOTHING –– ELSE, since.

I was not all that enamored of Mr. Trump when he first threw his proverbual hat into the proverbial ring, but at this point I am absolutely BESOTTED by him, because his vast army of detractors are SO vicious, SO vile, SO blind to goodness, wisdom and truth,, SO wicked –– and SO incredibly STUPID –– Mr. Trump has become a great HERO simply for standing up to them with aplomb, while repelling the myriad slings and arrows that come his way every hour of every day.

The guy is a latter day COLOSSUS. I have come to see him as Our Last Best Hope –– possiby our ONLY hope..

If Mr. TRUMP fails, our NATION fails, our FREEDOM will be lost, and the United states of America, as founded, will soon be swept into the dustbin of history.

Our descendants will all be SLAVES to the monstrous Soviet-style Peoples Republik Mondial governed by ruthless, heartless, super-rich, godless, unprincipled Oligarchs.

For those reasons I will no longer tolerate anyone who says a single WORD against him, because that person has made himself my mortal enemy,.

I used to be an Anglophile. Now, I am an Anglophobe.

England is NOT England anymore. LONDoNISTANT and all that that implies has DESTROYED Great Britain.

It's the wost thing tcoealing since the Third Reich.

Sorry FT, but I like capturing ALL of Slavoj Zizek's material in one handy place... and this is it. Just because it's posted here doesn't mean I'm endorsing the views of the author.

However, when you reach "December," as i have, one doesn't have time for the pain any more. Neither does one seek exploration of Darkness, Derangement, Dissipation, Degeneracy, Debauchery or mere "Difference for the Sake of Difference."

Having indulged for many years in a generous sampling of what-might-be-called "The Smoergasbord of Life" I feel well-qualified at this point to know what pleases my palate and what causes Acid Reflux, Somach Aches, Vomiting, and Diarrhea. Having learnt that valuable lesson in The School of Hard Knocks, naturally I am loath to eat those things that give me fits of dyspepsia and dysentery.

Therefore, having reached December, I feel entitled to be judgmental.

Unfortunately the wisdom acquired by age and experience is rarely transferable to others. It would appear that most of us must leither earn things the Hard Way, or not at all.

And that, I believe, is why more than nine-tenths of humanity struggles, stumbles, falls, breaks limbs, and experiences rage, grief and despair. Fulfillment is rare, because most feel it may be achieved at too high a price.

That said, I freely acknowledge that "One man's meat could well be another man's poison."

None but fools ever said living is an easy task.

It has been ever thus.