When does one belong to a community (Gemeinschaft)? The difference concerns the netherworld of unwritten obscene rules which regulate the "inherent transgression" of the community, the way we are allowed/expected to violate its explicit rules. This is why the subject who closely follows the explicit rules of a community will never be accepted by its members as "one of us": he does not participate in the transgressive rituals which effectively keep this community together.

And society (Geseilschaft) as opposed to community is a collective which can dispense with this set of unwritten rules—since this is impossible, there is no society without community.

This is where the theories which advocate the subversive character of mimicry get it wrong; according to these theories, the properly subversive attitude of the Other—say, of a colonized subject who lives under the domination of the colonizing culture—is to mimic the dominant discourse, but with a distance, so that what he does and says is like what the colonizers themselves do... almost like it, with an unfathomable difference which makes his Otherness all the more palpable.

One is tempted to turn this thesis around: it is the foreigner emulating faithfully the rules of the dominant culture he wants to penetrate and identify with, who is condemned forever to remain an outsider, because he fails to practice, to participate in, the self-distance of the dominant culture, the unwritten rules which tell us how and when to violate the explicit rules of this culture. We are "in," integrated in a culture, perceived by their members as "one of us," only when we succeed in practicing this unfathomable DISTANCE from the symbolic rules—it is ultimately only this distance which exhibits our identity, our belonging to the culture in question.

And the subject reaches the level of a true ethical stance only when he moves beyond this duality of the public rules as well as their superego shadow;

in John Irving's The Cider-House Rules, these three levels of ethics are staged in an exemplary way. First, we get the straight morality (the set of explicit rules we choose to obey—Homer Wells, the novel's hero, chooses never to perform an abortion); then, we experience its obscene underside—this is what takes place in the "cider house" in which, while on seasonal work there, Homer learns that explicit rules are sustained by more obscene implicit rules with which it is better not to mess); finally, when, based on this experience, Homer acknowledges the necessity to BREAK the explicit moral rules (he performs an abortion), he reaches the level of ethics proper. And does the same not go also for Nicole in The Sweet Hereafter? Is Nicole's act not the gesture of asserting her distance towards both poles, the larger society as well as the "sweet hereafter" of the traumatized community and its secret rules?

-Slavoj Zizek, "The Act and Its Vicissitudes" (excerpt) 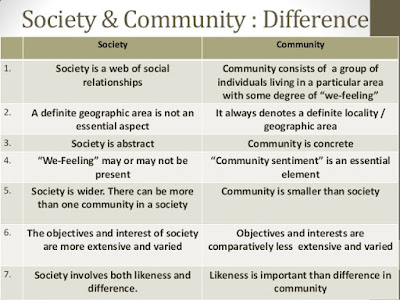 ...or perhaps this post-title would better read: "Community - The Ethical Individual - Society"

...and perhaps we all need to just accept the fact that we'll always be a "little on the outside" of any "community" to which we attempt to belong, and that this is "necessary" for the "good" of our greater Society.

As a proud, determined INDIVIDUALIST, who fits no convenent, easily identifiable mold, I consider myself A Community of One.

At the same time I am not at all "ANTI-SOCIAL."

I believe fervently in the need for individuals to practice a form of hypocrisy society prefers to refer to as "politeness," in all my daily transactions.

Politeness greases the gears an bearings that make the machinery of organized, civilized society work at most agreeably at peak efficiency.

Those who arrogantly shun the Rules of Etiquette in favor of pushy, relentlessly rude,dmnding, abrasive, abusive, coarsely insulting behavior are NOT "individual," they are merely neo-BARBARIANS.