From Caligari to Hitler....

If you've never seen The Cabinet of Dr. Caligari..., or just wish to re-interpret it... in new ways.


Lad and Bull
A STUDY IN MOVEMENT
Aix-en-Provence, Mid-September, 1926
"A lad kills a bull." This sentence out of a school primer appears in a yellow ellipse in which the sun is boiling. Everyone is gazing down into the oval from the stands and trees, where the locals hang like overripe bananas. The bull careens through the arena in a stupor. Facing the drunken mass, the lad stands alone.

He's an orange point with a pinned-up braid. Thirteen years old, with the face of a boy. Other youths his age sweep across the prairie in magnificent costumes and rescue the white squaw from a martyr's death. Confronted with a bull, they'd have run away. The lad stands there and smiles ceremoniously. The animal succumbs to a marionette.

The marionette goads the gale according to the rules of the ritual (hat magnifies it. Even a little puppet could dangle the red cape that the bull recognizes as its counterfetish. It tries to assault it, but the cape floats away, transformed into an arabesque by the little puppet. A thing of nature could be gored, but powers wane when confronted with the weightlessness of the flowing pleats.

The marionette turns into an orange lass, who lures the oafish creature. She approaches it with swaying steps, her hands hoisting two small colorful lances. The upright heroine's theatrical laugh announces the start of the love battle. The bull falls into the snare of the cleverly calculated rhythm. But the web is elastic, and before you know it the tiny wizard has thrust the small lances into its flanks. Three pairs of lances adorn the patch, knitting needles in a ball of yarn, with waving ribbons. The bull tries to shake them off, but in vain: the geometry is firmly set in the bulges.

The lad unfolds a cloth as red as a cock's comb. The dagger he conceals behind the curtain is so long that he could use it to climb up into the air. The characteristics of the plane and the line indicate that the end is drawing near. The marionette makes the cloth scintillate and draws ever narrower circles with the dagger. The bull is seized by a trembling in the face of the ornaments' power. Those who earlier hovered about like rings of smoke and then struck it in numerous places now close in upon it ever more threateningly, so that it will expire on the scene.

Up to this point, it is still a game. The dagger could still pull back; the redness would not necessarily have to encounter itself in blood. It is a single stab, a rapid stabbing sparkle, that surges through the barrier. The dagger darts forth from the marionette; it was not the lad who wielded it. The astonished element recoils and glares. The curving of the sinking mass triumphs over the line of the dagger. Now colors and sweeping movements dominate the scene.

Caps and bags fly into the air as the miniature victor runs a lap, bouquets of jubilation. The sun glows in the ellipse. The lad stands there and smiles ceremoniously. 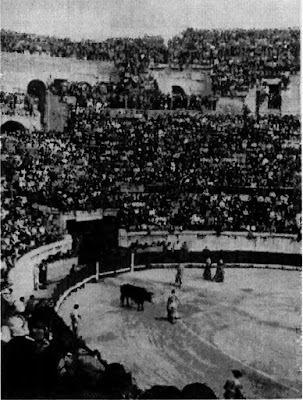 'TIS the SEASON to be JOLLY NOT DOLEFUL and OVERLY INTROSPECTIVE

'Twas two days before Christmas
And Papa Grouch here
Made a pact with the Devil
To stay home this year.

The cupboard was bare
And the table unclad
Because of this grumpy
Self-centered old Dad,

Who'd decided it all
Was too much of a strain
That denuded his wallet
And caused him great pain.

Mama was despondent
The babe on her lap
Did nothing but howl
And spit up its pap.

With carols in harmony
Sung at the door
With lighted red candles
That dripped on the floor.

Then in marched Tom Turkey,
Who went straight to the oven,
Saying, "Pluck me and stuff me,
I'm dyin' for lovin.'"

And onions and apples
And sausage and sage
And quite enough butter
To pay a week's wage.

The cranberry mold
Like a rubicund belly
Shook and shimmered itself
Like a gem made of jelly.

A baker on crutches
Who only could hobble
Said, "Soon that old bird
Will be ready to gobble."

For cheering and warming
Pa Grouch with his pain,
Who was soon moved to say,
"I've no right to complain.

"With neighbors like you,
I feel it's a shame
I ever indulged
A desire to maim

"The Spirit of Joy,
Good Will, and Good Cheer.
I promise you all
I'll be nicer –– NEXT YEAR."

Then placing his thumb
At the tip of his nose
He waved them Good Night
And to bed up he rose.

But I heard him exclaim,
As he moved past our sight,
"Don't let the door hit your butt,
When you leave. Now GOOD NIGHT!"