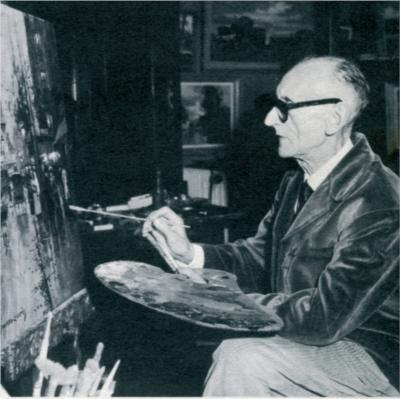 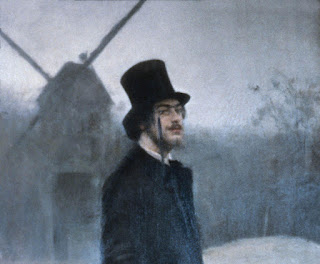 I am accepting this as an especially beautiful early Christmas Present, FJ.

I wish the pianist had been identified, because his or her understanding of the subtleties in Eric Satie's deceptively simple music is profound and beautifully realized as few keyboard artists can do. The notes by themselves don't give us much. It is the artistic insight that fills the space between and surrounding the notes that bring Satie's unique vision to life.

So much of whatever it is that makes life worthwhile is unseen, intangible, and unquantifiable. A painter with the talent of a Cortes is able to show us aspects of scenes and images no camera could ever hope to capture no matter how sensitive and aware the photographer might be.

You're right –– the coupling of Cortes's poignantly evocative fin de siecle Parisian streetscapes –– many filled with images of the city now overly familiar to tourists –– with Satie's music make a perfect complement.

"Exquisite Melancholy" would be my term for it. More thoughtful and introspective than merely sad. As a New Yorker, I am familiar with walking busy streets filled with preoccupied citizens passing seductive, beautifully decorated shop windows and the beckoning glow of taverns and the tantalizing aromas given out by restaurants. Times when I had no money to partake of any of this bounty, but even so, just the vision of it gave a feeling of satisfaction and well-being that no hick town could possibly offer no matter how hospitable it might be.

Anyway, this remarkable video perfectly captures the wistful essence of a bygone era for which many are bound to feel nostalgia even if they've had no connection to it, and never known anything about it.

Thanks, FJ. and MERRY CHRISTMAS!

Actually, I love how Cortes play with "light" and the vibrancy of the colours that he uses to represent it. It's very... melancholic. ;)

ps the Pianist was Aldo Ciccolini.

Ah yes! Ciccolini –– a great Italian virtuoso who had the looks of a matinee idol in his youth. He never achieved the fame he deserved in this country. There are many such non-Jewish, British, European, Russian, American, South American and even Turkish piano players who achieved greatness but were given the international acclaim and adulation received by The Jewish Pianists –– all of whom served their fame it's only fair to say, but so did a great many others.

Van Cliburn broke through the invisible barrier when he won the Tchaikovsky Competition in 1958 and became the darling of Moscow and the toast of three continents for a brief period, but the Jewish-controlled enemedia in New York was not about to let him enjoy his success for long. He was consistently damned with faint praise then panned with outright derision by a relentlessly hostile press, which ultimately led to his early retirement from the concert stage. A great loss for the concertgoing public.

Ciccolini had a great career in Europe, and maybe he didn't really care all that much what this country thought of him, who knows?

I was not familiar with his back story, but I agree with your analysis of his technique v. Satie.