A Message from the Sh*t Lord to All Sh*t Posters...


LOS ANGELES, CA (Catholic Online) -- Pope Francis has made a statement, criticizing the media for its obsession with fake news and smut, all intended to generate clicks, and ad revenues. The problem with the obsession is that the public is starved of the truth and accurate information.

Pope Francis criticized the media for having "the disease of coprophilia: constantly looking to communicate scandal, communicate ugly things, even if they are true... And since people have a tendency towards coprophagy, it can be very damaging,"

Coprophilia is the love of feces, usually to the point of consumption.

By removing a portion of the truth, the media is able to misdirect the public and inflame scandal. Lies can be destroyed as the media peddles divorce, adultery and infidelity, and every other kind of smut.

How many publications sell because they publish pictures of women's mostly nude bodies? Even teenage girls are vulnerable to this kind of exploitation. Many celebrities cannot enjoy a day at the beach without becoming the object of a photographer's lust. At the same time, mature individuals become objects of revulsion as the media hypes their weight, or their illnesses, or some other aspect of their life. All while ignoring the person's better character, and worse, ignoring the real news of the day.

With limited time for people to consume headlines, every story about Kanye West is less space for reporting on government scandals that deprive taxpayers of billions of dollars. There's less room for reporting facts and providing the public with the information they require to make smart decisions.

So much money is wasted by our government that if it were saved, it could end both homelessness ($20 billion, and hunger ($30 billion) overnight. The most conservative estimate of government waste is about $125 billion per year.

Public anger is often wasted on celebrity scandals and political slander. The real issues are lost.

Pope Francis criticized media 'calumny', which is to tell a lie about another person.

He said this of people's pasts, and it's very important because many people have made mistakes: "every person has the right to a good name, but perhaps in their previous life, or in their past life, or 10 years ago, had a problem with the law or in his family life...so, bringing this into the spotlight is grave, it damages, it cancels a person."

He spoke about the habit of bringing out what people did in their past to damage them, even after they have repented and paid their debt.

"Journalists sometimes risk becoming ill from coprophilia and thus encouraging coprophagia," he said. "Which is a sin that taints all men and women, that is, the tendency to focus on the negative rather than the positive aspects."

Of course, the media alone is not to blame. While Pope Francis focused on the media, we too share culpability. Our choice to read smut over real news is a major reason why media outlets continue to degrade and publish garbage instead of real news. We have an obligation to consume media intelligently, and to insist upon accurate news, not smut. Otherwise, we become consumers of our own excrement.

The Internet was designed for sh*t posting! 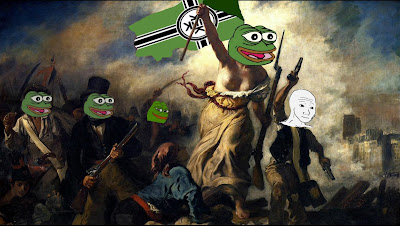 The Internet was designed for sh*t posting!

On my honor I pormise always to do my best for God and my country, to do what is right, good, proper, and helpful to others, to strive always to be cheerful, thrifty, brave, clean and reverent, –– and above all –– never to post shit on the internet, on public advertisements, strefronts, exterior walls, private or public fences, or the inside walls of public toilet stalls.

"As long as you repeat the evil words, and describe the evil deeds of others, you, yourself, are CONTRIBUTING to the evil, and helping greatly to PROPAGATE it."

"Whoever fights monsters should see to it that in the process he does not become a monster. And if you gaze long enough into an abyss, the abyss will gaze back into you." - Friedrich Nietzsche

You have to admit, when liberals are in the mood to sh*tpost, their sh*tloards ALL make an appearance.

Yes, but WE don't HAVE to bathe in their sewers, eat from their chamberpots, or drink from their pissoirs.

I was a much better person before I started to mix it up with knaves, fools, demons, and jackals.

It's best summed up in these ancient adages:

"Lie down with dogs, get up wth fleas."

"You can't walk through mud without getting your boots dirty."

Nobody ever won a war by laying down their guns.

They KILLED their enemies, and THEN laid down their guns.

So grab a tar baby and jump in!

The Kekistani people NEED your support!