When Ray Lewis talks, reporters investigate. When feminists talk, liberal reporters don't. Anybody besides me note a prejudicial "credibility bias" in any of this (tattamount to "liberal racism"?)

Now give me my candy, or I'll tear up your cities! 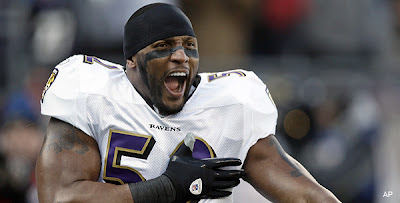 So … remember when Ray Lewis insisted that the longer the lockout went on, the more crime there would be? Turns out, there's no historical precedent for such a statement, according to the Atlanta Journal-Constitution's PolitiFact group.

In a recent ESPN interview, Lewis said that "if we don't have a season -- watch how much evil, which we call crime, watch how much crime picks up, if you take away our game." Lewis' contention was that the lockout affected the fans as much or more than the players and owners.

The AJC accepted Lewis' invitation to do that research, contacted the Northeastern's Sport in Society center and was told that "there is very little evidence supporting Lewis' claim that crime will increase the longer the work stoppage lasts."

The Baltimore Sun also looked at crime in 1982 and found an increase during the strike in only one category: homicides.

The Sun tried some other methods to tackle Lewis' claim. The newspaper's Crime Beat blog looked at crime data last season when the Ravens had their bye (off) week. The Sun found there was slightly more crime during the bye week.

The Sun looked at crime in Baltimore the four weeks before the season started and the first four weeks of the season. There was the same number of crimes. The Sun also examined the crime rate there at the end of the Ravens' season and what happened afterward. What did it find? There was less crime after the season ended in early January.

The Sun stressed several times that its findings were unscientific.

The AJC then went to look at increases in crime during bye weeks, assuming that the no football/higher crime equation would fit a much shorter time frame. No real evidence was presented that would lead in one direction or another.

One criminologist we interviewed had a different take. Northeastern University professor James A. Fox heard Lewis' comments and did a study. He looked at key FBI data from the last three years available, 2006 through 2008, focusing on the week before the Super Bowl because there were no games that week and there was intense interest in football around that time of the year. Fox, who was referred to us by the FBI, found no increase in crime the week there was no football.

"I took the Ray Lewis(notes) challenge and I don't see any evidence of [a crime increase]," said Fox, the author of several books on crime who also writes a crime and punishment blog for the Boston Globe.

As far as player crime … well, aside from Kenny Britt(notes) and the Tampa Bay Buccaneers, there hasn't been a huge increase during this offseason, and the closer both sides get to a settlement, the more most players will be putting their collective noses to the grindstone, leaving them too busy to get in trouble.

At least, that's one theory we hope will stick.

There's a new Gepetto in town, best get used to it. And have they gotten the messaging subliminals, DOWN! 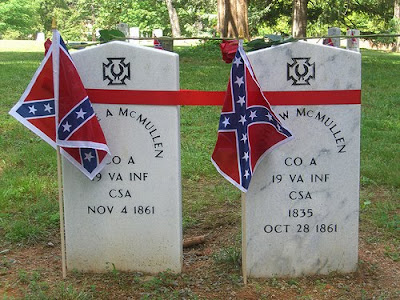 BALTIMORE (AP) — Maryland’s United Daughters of the Confederacy are holding a special ceremony in Baltimore to mark Confederate Memorial Day.

The event Saturday is meant to honor thousands of soldiers who served the Confederacy during the Civil War. The group is gathering at the Loudon Park Cemetery in Baltimore where 600 Confederate soldiers are buried.

The group says soldiers from nearly all the Confederate states are represented at the cemetery.

When they poured across the border
I was cautioned to surrender,
this I could not do;
I took my gun and vanished.
I have changed my name so often,
I've lost my wife and children
but I have many friends,
and some of them are with me.

An old woman gave us shelter,
kept us hidden in the garret,
then the soldiers came;
she died without a whisper.

There were three of us this morning
I'm the only one this evening
but I must go on;
the frontiers are my prison.

Les Allemands e'taient chez moi, (The Germans were at my home)
ils me dirent, "Signe toi," (They said, "Sign yourself,")
mais je n'ai pas peur; (But I am not afraid)
j'ai repris mon arme. (I have retaken my weapon.)

J'ai change' cent fois de nom, (I have changed names a hundred times)
j'ai perdu femme et enfants (I have lost wife and children)
mais j'ai tant d'amis; (But I have so many friends)
j'ai la France entie`re. (I have all of France)