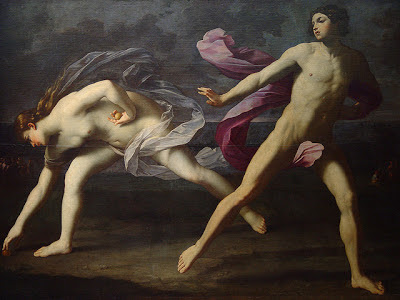 ..."fair Atalanta, swift of foot, the daughter of Schoeneus, who had the beaming eyes of the Graces, though she was ripe for wedlock rejected the company of her equals and sought to avoid marriage with men who eat bread."

The gender gap in the 2012 presidential election was the largest since Gallup began tracking the metric in 1952, according to data released by the polling firm on Friday.

Reagan won both men and women in that election, but carried men by 28 points and women by only 10 – a disparity of 18 points.

2012 was the fifth straight election to feature a double-digit gender gap.

Still, Romney performed better among women than Sen. John McCain (R-Ariz.) did in 2008. Obama had a 14-point advantage among female voters over his GOP counterpart that year. Romney also outperformed McCain among men in this election – in 2008 Obama and McCain split the male vote.

The politics of gender played a significant role throughout the 2012 election, as Romney looked to cut into Obama’s advantage among female voters by framing the economy as a women’s issue.

Posted by -FJ the Dangerous and Extreme MAGA Jew at 3:06 PM

So, now it's gender warfare?

The crab people are after us!

"Philosophy is the translation of Eros into Logos" - Byung-Chul Han

Life is a chemical System that uses energy to keep itself from reaching chemical equilibrium. Equilibrium is the situation in which chemicals no longer have a tendency to react over time.