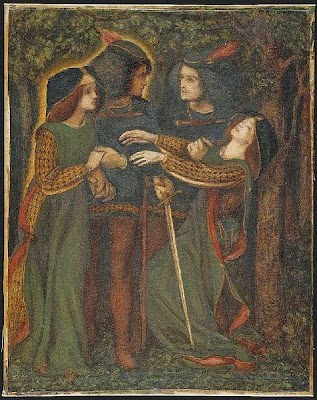 Dante Gabriel Rossetti, "How They Met Themselves" (1864)

Doppelganger: In fiction and folklore, a doppelgänger or doppelganger (/ˈdɒpəlˌɡæŋər/; German: [ˈdɔpəlˌɡɛŋɐ] ( listen), look-alike, literally a "double goer") is a paranormal double of a living person.

It also describes the sensation of having glimpsed oneself in one's own peripheral vision with no chance of the supposed phenomenon having been a reflection.

A doppelgänger is often perceived as a sinister form of bilocation and is regarded by some to be a harbinger of bad luck. In some traditions, a doppelgänger seen by a person's relative or friend portends illness or danger while seeing one's own doppelgänger is said to be an omen of death.

Recent scientific experimentation has duplicated several doppelgänger effects when electrical stimulation was applied to the left temporoparietal junction of a patient's brain.

In contemporary vernacular, the word doppelgänger is often used in a more general sense to identify any person that physically ‒ or perhaps even behaviorally ‒ resembles another person without regard to the word's original paranormal meaning.

A dream or illusion had haunted Lincoln at times through the winter. On the evening of his election he had thrown himself on one of the haircloth sofas at home, just after the first telegrams of November 7 had told him he was elected president, and looking into a bureau mirror across the room he saw himself full length, but with two faces. It bothered him; he got up; the illusion vanished; but when he lay down again there in the glass again were two faces, one paler than the other. He got up again, mixed in the election excitement, forgot about it; but it came back, and haunted him. He told his wife about it; she worried too. A few days later he tried it once more and the illusion of the two faces again registered to his eyes. But that was the last; the ghost since then wouldn't come back, he told his wife, who said it was a sign he would be elected to a second term, and the death pallor of one face meant he wouldn't live through his second term.

i understand that lincoln took "mercury" for his headaches...which likely contributed to his depression and anxiety....

...and yoy don't have to believe Sanberg, as the bit was plagiarized from another author of Sandberg's era... if i read the wiki doppelganger page correctly. :)

This is adapted from Washington in Lincoln's Time (1895) by Noah Brooks, who claimed that he had heard it from Lincoln himself on 9 November 1864, at the time of his re-election, and that he had printed an account "directly after." He also claimed that the story was confirmed by Mary Todd Lincoln, and partially confirmed by Private Secretary John Hay (who thought it dated from Lincoln's nomination, not his election). The Brooks version is as follows (in Lincoln's own words):
It was just after my election in 1860, when the news had been coming in thick and fast all day and there had been a great "hurrah, boys," so that I was well tired out, and went home to rest, throwing myself down on a lounge in my chamber. Opposite where I lay was a bureau with a swinging glass upon it (and here he got up and placed furniture to illustrate the position), and looking in that glass I saw myself reflected nearly at full length; but my face, I noticed had two separate and distinct images, the tip of the nose of one being about three inches from the tip of the other. I was a little bothered, perhaps startled, and got up and looked in the glass, but the illusion vanished. On lying down again, I saw it a second time, plainer, if possible, than before; and then I noticed that one of the faces was a little paler — say five shades — than the other. I got up, and the thing melted away, and I went off, and in the excitement of the hour forgot all about it — nearly, but not quite, for the thing would once in a while come up, and give me a little pang as if something uncomfortable had happened. When I went home again that night I told my wife about it, and a few days afterward I made the experiment again, when (with a laugh), sure enough! the thing came back again; but I never succeeded in bringing the ghost back after that, though I once tried very industriously to show it to my wife, who was somewhat worried about it. She thought it was a "sign" that I was to be elected to a second term of office, and that the paleness of one of the faces was an omen that I should not see life through the last term.[13]
Lincoln was known to be superstitious,[14] and old mirrors will occasionally produce double images; whether this Janus illusion can be counted as a doppelgänger is perhaps debatable, though probably no more than other such claims of doppelgängers. An alternate consideration, however, suggests that Lincoln suffered vertical strabismus in his left eye,[15] a disorder that could induce visions of a vertically displaced image.

there's a Vermeer exhibition in the theatre tonight. i'm going to it. 30 paintings. music.

Very nice. reminds me of the old days when my son used to sing... although his voice was much less mature.

I'm not willing to discount the possibility of Lincoln's prescience.

There are more things in heaven and earth, Horatio,
Than are dreamt of in your philosophy.
- Hamlet (1.5.166-7), Hamlet to Horatio

Perhaps we all are to some extent. Not necessarily a bad thing because sometimes insanity is the thing of which dreams are made.

FJ,
Perhaps Lincoln had a retinal tear or a disorder of the lens of one eye.

Many things are possible, and I discount none of them. As for the last possibility, you might have a better idea than I.

I tried to do too much yesterday, I guess.

one of their eyes turned inward, and the other directly up to the zenith

Jonathan Swift... a real prophet before his time.