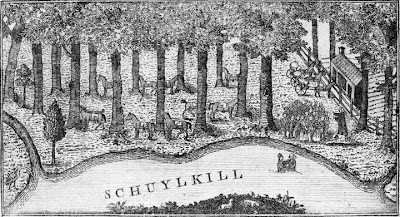 'When superstition dark and hauty plan
Fettered the genius and debased the man,
Each trifling legend was as truth received;
The priest invented, and the crowd believed;
Nations adored the whim in stone or paint,
And gloried in the fabricated saint.
Some holy guardian, hence, each nation claims—
Gay France her Dennis, and grave Spain her James,
Britons at once two mighty saints obey—
Andrew and George maintain united sway,
O'er humbler lands the same odd whim prevails;
Ireland her Patrick, boasts her David, Wales.
We Pennsylvanians, these old tales reject,
And our own saint think proper to erect—
Immortal Tammany of Indian Race,
Great in the fields, and foremost in the chase,
No puny saint was he, with fasting pale,
He climbed the mountains, and swept the vale;
Rushed through the torrent with unequaled might;—
Your ancient saints would tremble at the sight—
Caught the swift boar, and swifter deer with ease,
And worked a thousand miracles like these.
To public views, he added private ends,
And loved his country most, and next his friends.
With courage long he strove to ward the blow,
(Courage we all respect, e'en in a foe)—
And when each effort he in vain had tried,
Kindled the flame in which he bravely died!
To Tammany let the full horn go round;
His fame let every honest tongue resound;
With him let every generous patriot vie
To live in freedom, or with honor die!
Nor shall I think my labor too severe,
Since ye, wise sachems, kindly deign to hear.' 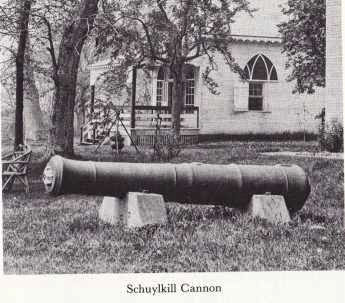 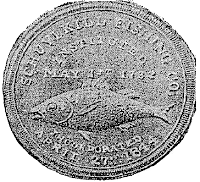 
A shame the name of Tammany’s been linked
With the vilest of politicos named Tweed,
Who ran New York in manner quite distinct
Eschewing never any dirty deed.

The entity still known as Tammany Hall
Shall live in infamy, and so obscures
The truth about its namesake, overall
A noble savage, whose good name endures

Only in the writings of The Sachem,
Neddy, who on Tammany heaped praise.
But, kind words today are rare. We rarely watch ‘em,
Because none restores these days, instead they raze.

Of Tammany, himself, we should think kindly,
Not follow false associations blindly.

Thank you for that truthful and inventive contribution, Mr. FreeThinke!

Two distinct American classes of society emerged from the Revolution. The "officer" class (Cincinnati) and "enlisted" class (Tammany). And after liberation, they unfortunately went their 'separate' (but equal) ways.

...stuck a feather in his cap, and called it macaroni

I look forward to your May 1 greeting every year.

...and I look forward to an annual "Morris Dance". I've recently discovered that its a much older tradition than I had previously imagined. :)

FJ, A couple of weeks ago, I realized that May 1st was fast approaching and I thought I would surprise you by beating you to the punch in your annual rounds and greet you with a Kawanio che Keeteru!

Unfortunately I forgot that today is the day.

I miss speaking with friendly Indians and talking about torpedoes.

It's a tradition catching on in other countries faster than here. I've heard that in Finland, it's called Vappu...