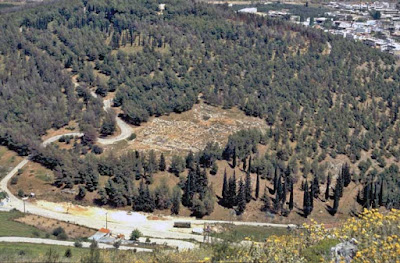 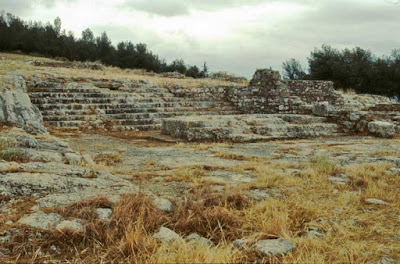 Oracle of Apollo Deiradiotes, on the acropolis of Argos. The oracle was given by a prophetess, who was obliged to abstain from matrimonial connections once in every month. She was believed to become inspired by tasting of the blood of a lamb which was sacrificed during the night. This oracle continued to be consulted in the days of Pausanias 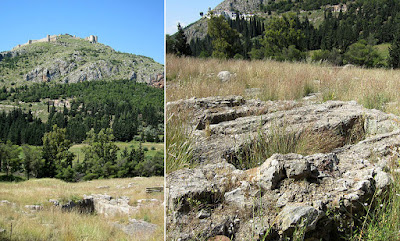 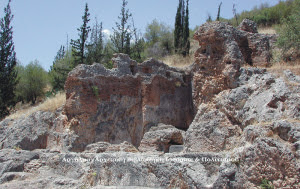 The Criterion of Argos
Criterion

1: a standard on which a judgment or decision may be based the university's criteria for admission

2: a characterizing mark or trait

Translated by Google from Greek:


The "Criterion" of Argos, an ancient monument located on the southwest side of the town, on the foot of Larissa hill, which came to have its current structure during the 6th-3rd century BC period. Initially, it served as a court of ancient Argos, similar to Areopagus of Athens. According to mythology, it was at this area where Hypermnestra, one of the 50 daughters of Danaus, the first king of Argos, was tried. Later, under the reigns of Hadrian, a fountain was created to collect and circulate water coming from the Hadrianean aqueduct located in northern Argos. The site is connected via a paved path with the ancient theatre

Street Gounaris of Argos, shortly before the Ancient Theatre, a sign of the archaeological service writes "criterion - Nymphaeum" and pointing right towards the hill, which is on top of the castle Larissa. Few of attention and even fewer have visited this ancient monument of the town, connected to the beginnings of history. So what was this Criterion? According to mythology, Poseidon was paired with Libya, Nile daughter, and had two sons, Agenor and velum. When the children grew, the Agenor went to Phoenicia and made his own kingdom, while Vilos stayed in Egypt, he took the woman sagacity, daughter and that of the Nile, and acquired twin sons, Egypt and Danaos.

The Vilos before dying appointed Danaos as king of Libya, where he founded the temple of Amun, Egypt and the king of Arabia, which he called "Egypt." The Egypt acquired 50 sons and 50 daughters of Danaos, the Danaides. Others say that the children each brother were from the same mother and others that were born from the same father, but most women who had each of his brothers (Europe, Antinoi, Tegea and Kassiepeia).

But once children Vilos, the Egypt and Danaos, clashed because Danaos envied in Egypt, who had male children, while he had only girls. even feared that the sons of Egypt will make their wives and daughters would take power. Danaos then fearing the 50 sons of Egypt, at the oracle of Athena, rigging ship with 50 oars, she and the girls, and she left with his daughters.

First they approached Lindos Rhodes, who was the colony of Argos , where Danaus founded the temple of Lindia Athena. Finally they landed in the village Apovathmoi, today Kiveri, where arrived at Argos. When he arrived there Danaos asked Gelanora, which was then Argos King, to deliver the throne, arguing that great-grandmother was Io, the daughter of Inachos and mistress of Zeus chased by Hera transformed into cow and hid in Egypt. The Gelanoras and Danaos discussing the thing, until night fell without reaching an agreement. They said therefore to think again and decide the next day.

In the morning, just woke up, found in front of an unexpected sight: A wolf was dashing in a cattle herd and the bull, the leader of the pack, trying to block him. The Argos likened the attacker wolf with the newcomer Danaos and defending bull with Gelanora and all agreed to become king of Argos that, the animal will prevail in the duel. So when the wolf devoured the bull, they received King Danaos, who ascended the throne of Argos and did a temple dedicated to Apollo High School, who believed he had sent the wolf. In this myth underlying the relationship of the city with the wolf, which is today emblem of Argos.

Danaos, as king of the city, dedicated to teach letters and cultivating fields in Argos, open wells and irrigate crops and lived happy with his daughters and his subjects. But when men were the sons of Egypt, they took the boats came to Argos and Danaos asked to marry them with his daughters, the Danaides, to forget their hatred. There were objections but the sons of Egypt, not lifted conversation. Danaos, because they do not have the strength to confront them, kamothike fraudulently that accepts their proposal and agreed the marriage of the 50 sons of Egypt with 50 daughters of Danaus.

Before the wedding night, however, Danaos gathered his daughters, gave them a knife and ordered to kill each her husband when he has fallen asleep, threatening with death any flinch and disobeyed his command. The brides, therefore, killed the first night of their marriage men. The murderess all left forever with the defilement and even the underworld sentenced to eternal trying to fill with water leaky jars. This is the famous "bottomless pit."

One of the 50, however, the hypermnestra, who had married the Lygkea because, they say, was pleased with the wedding night, the lad fell in love and out of love and compassion earned him his life. Danaos, to punish the disobedient, the imprisoned and put on trial. This trial was the historic site of ancient Criterion of Argos.

There, according to legend and the story of the traveler Pausanias, the king of Argos Danaos convicted the Ypermistra who disobeyed his order and not killed her husband Lygkea. But Argos, invoking the divine law of Venus, protector of conjugal bed, refused sentencing. So hypermnestra with the help of Venus, who presented a defense witness, acquitted! After this Lynx avenged his brothers, who died unjustly, killed all the Danaides and their father, became absolute master of Argos and was recognized king together with hypermnestra, devoted to the goddess Venus a statue.

The area of Criterion believed that he was at the foot of Larissa, in the flattened area formed over the retaining wall, northeast of the ancient theater at a distance of about 100 meters from it. It consists of an impressive terrace measuring 35CH21 m., In which a central scale lead. A portion of its surface is carved in the rock and the rest based on the mound, which keeps a polygonal terrace wall. The presence of votive inscribed reliefs, depicting the "Epitelides" deities associated with the administration of justice, led to the identification of the building with the "Criterion", court room, perhaps the oldest of the city.

The Vollgraff finds great similarity be late Criterion with the Athenian Areopagus, where Orestes, son of Agamemnon of Mycenae, was acquitted, according to Euripides. This area got its saved configuration in Roman times, from the 6th to the 3rd century BC

In this area the Roman emperor Hadrian , half of the 2nd AD century, built the Nymphaeum, a monumental fountain, type "Nymfeou-Cave" for the collection and channeling of the city of Argos water, carrying the Hadrian's Aqueduct. Hadrian's Aqueduct project of Roman Emperor Hadrian, in the northern part of the city was an aqueduct, a length of approximately 30 kilometers, built with stones and korasani (impermeable mud from broken ceramics), carrying water from the village of Kefalovrysos city of Argos .

The nymphaeum is composed of two tanks for water carved into the rock, from which began the city's main water supply network. Part of the domed structure was carved into the rock, while the rest was built with bricks and had arched roof. The water entering the fountain from a mouth and bounced from the left hand of a statue of Emperor benefactor, located in the center of the building, filling the western transfusion tank. Then the water passed the east tank above a hydraulic scale forming cascade.

Today the "Criterion" and "Nymphaeum" is connected with the ancient theater of Argos with a paved path, offering spectacular panoramic views of the city. On the way there and even a relief on limestone rock, which in the right part of the cavalcade depicts a male figure with horses to walk to the left and the rider holds argeitiki round shield and spear. In the left portion shown crater with tapered leg, where the right to unreel a snake with its head reaches the edge of the vase. The nation has identified with the St. George killing the snake. The relief is dated to the late 4th - early 5th century. Depending relief devotional character have been found at the foot of the hills of Larissa and Shield.

This space of Argos to the history that is lost in the myth remains dormant and untapped today. Citizens ignore the authorities to undermine their attitudes and institutions have not been able until today to seize him, and offered as a space for the realization of quality events. Located at the foot of the historical castle of Argos, provides panoramic views of the city, it has a long history, offers evocative atmosphere, especially during the summer months. Could become the organization of music-theater or other events in its surroundings, after, of course, configured, and can constitute a competitive advantage for the history and the city's cultural life.

The fact that it has no easy access by car can be and advantage. He would give an excellent opportunity for a short walk from the flea market parking up there from the perpendicular to the street Gounari cobbled streets and a walk in the Foroneos area not lacking in charm or the Athenian Plaka old Nafplio.

So much more interesting, the old oracles, compared to the new one...

Yes, they were are lot less cryptic, back in the day.. ;)