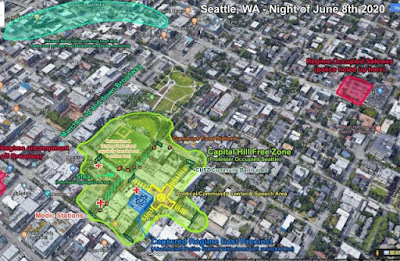 
It is really quite stunning how the U.S. media have avoided reporting on a group of activists in Seattle who have taken over part of the city surrounding the abandoned East precinct police station. No-one is being allowed inside what they are calling a “Free Capitol Hill Zone” or “Capitol Hill Autonomous Zone (CHAZ).

The activists have barricaded the streets and will not let any journalists or city officials inside their declared zone of control. The region expands across six blocks as outlined by the occupying groups. Information on the encampment AVAILABLE HERE.

According to the area activists the East precinct of the police station is called the “captured regime” (above blue). Journalist Julio Rosas tweeted photos from the ‘Zone,’ including flyers demanding that Seattle PD be defunded, and declaring that police “will always be racist because capitalism requires inequality.”

Independent journalist Andy Ngo has a great deal of familiarity with the groups assembled in the occupying effort. He describes the group in control of the area as “Antifa,” and cited tweets to suggest there were armed guards guarding entry among the occupy protestors. 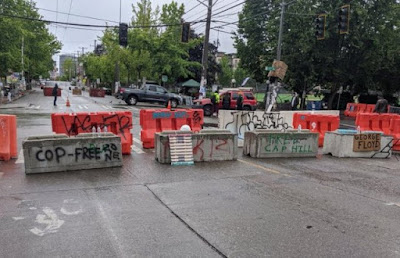 SEATTLE – City authorities may be expecting the activists to disperse, but the barricades and the content of their social media suggest they intend to stay. Local businesses and residents have “agreed to disaffiliate from Seattle basically,” in the words of one activist, who called it a “flux state in the making” – a reference to an anarchist commune from the fiction series Shadowrun. (RT link)

You would think the militant occupation of a major American city by a group of Antifa activists would lead to a great deal of news media coverage. However, it appears the media zeal to cover, excuse and justify the conduct of their radical Antifa allies has led to a complete black-out of coverage.


When antifa can’t achieve a full revolution, they take over a small area in leftist cities to carry out their utopian commune experiment. It ends in neighborhoods being destroyed & occupiers forcibly dispersed because of health hazards. They leave the filth behind for others. https://t.co/JWBntUW2zd


Seattle @MayorJenny is allowing a dangerous situation to fester. #Antifa militants have taken over & created an “autonomous zone” in city w/their own rules. Police precinct abandoned. Antifa set up barricades to create a border. Calling for volunteers to provide armed guard. pic.twitter.com/ksQI4NI5kP

We need more people with guns at the CHAZ 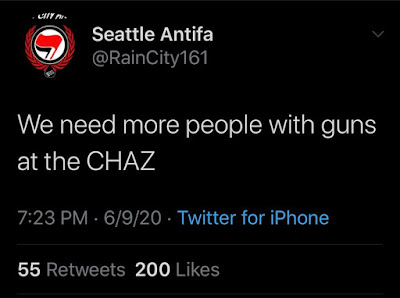 Who doesn't think that they learned this tactic in Germany and Syria?

The last drawbridge has been pulled up, the armories are stocked with anti-ISIS weaponry!

The control room is a buzzin' with enough conspiracy theories to make Father Coughlin blush!

Seriously though. I learned about CHAZ YESTERDAY on RT TV. It's hardly a secret!

And who came up with the Isis-antifa connection? Jim Hoft?

Still, it's all HIGHLY entertaining, now send in the Boogaloo Bois!!!

Hmmm... did you read the comments on that Insight News Network (network? Two doozies and their dog?) video? I think it's a poor pastiche.

Tiptoe Though the Poo Poo
(For all Scheisskopf Trolls)

And when I slip slide through the doo doo
And you do too
Will you pardon me
And sit down in the doo doo with me?

And when we step out of the poo poo
at the website
Will you come with me,
And wash off all the poo poo with me?

America isn't Hamburg. We don't need abunch of armed Antifa squatters in the middle of Seattle.

I'm seeing a run on popcorn. To help with watching the painful spectacle of the US tearing at itself...

Two Columbus statues down so far. When's the OM sending in the army?

What is it with the Left anyways? When I want to do some LARPing, I just run down the Renaissance Festival in Crownsville. I don't get dressed up and Occupy Annapolis.

Besides, you're being mean: how much damage can some ethical coffee and soppy poetry really do? ;-)

As Lacan said to the student protestors in '68, "You demand a new master? You'll get one!"

The truly subversive act is Bartlebian.

How do. know it is all a show? Corporate NFL and Nascar sponsors and a whole political party the "bends the knee".

They don't call it "cultural capitalism" for no reason.

btw - the Mayor and other Seattle public officials are sooooo concerned that they haven't even deigned to tell the Governor of Washington State that Seattle is now seven blocks smaller than it was last week. THAT is how "in the tank" the Democrat Party is in FOR the protestors.

Statues are coming down all around us, as we speak. In Baltimore too. (Have there been any going down in your area, little Stinker?)

You invocation of an anklebiter like Andy Ngo was priceless: how many more times is he going to claim 'this is stuff the MSM don't want you to know'?

"THAT is how "in the tank" the Democrat Party is in FOR the protestors." I hope so. At least they're doing something!

The truly subversive act is Bartlebian.

A truly reactionary is opposing the removal of tributes to real criminals.

Did you know much of these things is cheap tat, installed in the twenties, much after the fact?


We on the Right in our desire always to try to be fair and truthful hold ourselves to a much higher standard than does the Left, whose shameless outrageous HYPOCRISY routinely makes "OUR" blood boil.

The Left's show of nauseating self-righteouness, zealous, stiff-necked irresponsibility, limitless capacity for mockery, haughty, cynicaal disdain, and lack of basic standards of decency (with few exceptions, of course –– not all Leftists are out-and-out fiends after all) puts "US" at distinct disadvantage.

In my long considered opinion the question we need to answer most would be, "How do we fight vicious, unprincipled, thuggish adversaries who gleefully, lie, cheat, steal –– and may even kill –– in their insatiable lust for unchecked POWER while maintaining "OUR" integrity?”

In other words while "THEY" have no compunctions whatsoever about PLAYING DIRTY, while "WE" appear to enfeeble and emasculate ourselves by trying to be "FAIR" to a vicious ENEMY who hasn't the sllghtest intention to be the LEAST BIT "FAIR" to US.

So we must answer this: Is it POSSIBLE to remain a "GENTLEMAN" while trying to defend one's interests against an army of THUGS, GANGSTERS, CHEATS, SWINDLERS and TREACHEROUS PIRATES who are bound and determined to take OUR COUNTRY AWAY from US?

A complicating factor, of course, would be the RINOS, the spineless WIMPS, and those arroogantly prissy little "ethicicists" devoted to a STRICTLY LEGALISTIC, "By-the-Book" approach, who may be LISTED as members of the GOP, –– and may even publicly IDENTIFY THEMSELVES AS "CONSERVATIVES" –– but who work senulously almost in lock-step with the DemonRats, the ENEMEDIA. The POISON IVY LEAGUE, and the entrenched bureaucracy of the Deep State to VILIFY, UNDERMINE, and DEFEAT President Trump in order to THWART his ENERGISING, LIBERATING, manly, wholesome, morale-boosting, restorative AGENDA?

We know all too well what the problems are ––, and we never tire of enumerating them and while wringing our hands and saying endless variatins of "AIN'T IT AWFUL? But does ANYBODY know –– or have any creative, inspiring, concrete, practicable IDEAS –– what we should DO?

Little Stinker: what have YOU done today to protect the statues of racist genocidal maniacs in YOUR area?

Little Stinker: instead of spending inordinate amounts of syllables intended to insult me that no one reads, why not put in some modest amount of counter arguments? Anyone reading this would think you didn't have any.

Goitie, dahlingk, you are without doubt one of THE snottiest, most disgusting, pseudo-inellectual, pseudo-sophisticated, ill-natured perverts to be found anywhere in Blogistan.

You, yourself, provide all the evidence needed to prove that statement of fact with virtually every flippant, sarcastic, snide, aggressively rude remark you post virtually all of which are an offense to the standards of good conduct and good taste by which I was raised.

Do you honesty beleve your mindless, formulaic insolence and vituperative personal attacks and me and your theatrical affectations of haughty disdain for everything I believe in and hold dear WARRANT a judicious, well-researched, carefully considered, weighty response that could hold up in a court of law?

You may think your cheap, smartass approach to discourse puts you on sone sort of high plane that show accrd y7 a sw f resect and deference, but to my xqisutey discerning eye it only acts as thin, hopelesly inadequate disguise that only serves to heighten awreness of your essential boorishness.

You, sir, have the manners of a guttersnipe, the soul of a scallop and the mind of a marmoset.

Nope. Still no semblance of an argument then. Suit yourself.