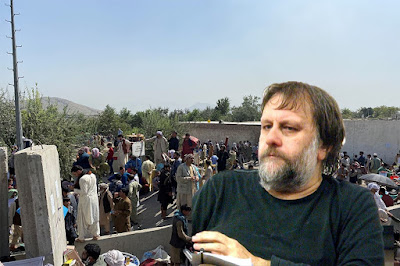 Manash Firaq Bhattacharjee, "Debate: A Refutation of Slavoj Žižek’s Views on the Taliban"

Žižek's contention, that the Taliban represents the Freudian "repressed" in collective form, seeking to challenge the hegemony of the west, is miserably out of place.
The Slovenian Marxist philosopher, Slavoj Žižek, in his characteristic combative mode, raised arguments against “the liberal Western view” in his rather animated assessment of the takeover of Afghanistan by the Taliban. Žižek feels that, to view the Taliban takeover in terms of terror and faith is reductive and not enough to grasp the political nature of the power that the Taliban represents, in real terms. Žižek identifies a “more complex and realistic” explanation of the takeover: ongoing war and corruption.

Žižek thought that there was a widespread “belief” that preferred Sharia law and oppression for the sake of safety and order. Are the countless people who desperately clung on to a US cargo plane and risked their lives; those protesting in the streets of Jalalabad, Asadabad, Panjshir Valley and Kabul; the families, women and children who openly fear for their lives and their future, also part of this “belief” network? Or do they fall outside Žižek’s category of belief-ridden people?

Žižek thinks it is too “traumatic” for the western liberal to consider – or engage with – the idea of faith as martyrdom. He thinks the power of faith behind the Taliban is not well enough understood by liberals as they treat the idea of faith as something ‘external’ to the political actors. Faith, in its liberal understanding, is simply understood in terms of God’s commandment. Žižek extends the meaning of faith, in the Taliban’s case, to something that does not merely lie in the sphere of convictions. The “material power” behind the Taliban’s ideology/faith is the physical embodiment of faith in the name of which one can sacrifice one’s life and body.

In other words, Žižek argues that, for the Taliban, faith is not merely a matter of choice but a matter of being. That is what grants these gun-toting thugs, Žižek believes, an ontological authenticity (and justification). But the Taliban isn’t special because its members are ready to sacrifice their own lives for the sake of a belief. All national armies are ready to die for their quasi-secular beliefs. What is more disturbing – yet not unique – is that they want to take the lives of others in the name of that belief. There is no matter of being that can escape the matter of (its relation to) the other. The ontological cannot escape the test of the ethical. That is why the Taliban, in an ethical sense, is a catastrophe of faith.

The Taliban believes in war. Sacrifice is not just a tool for the pure salvation of the self, but one that is enabled by the violent desire to sacrifice others. The crisis of such a belief is that, for its adherents, the world that does not share their belief is an enemy. The enemy establishes and justifies the double-sacrifice. Žižek’s reading of the ideology of faith is banal and blind to these ethical concerns.

Žižek brings Michel Foucault’s view on the Iranian Revolution of 1978 into the discussion in order to highlight the question of truth as a partial form of discourse that challenges universalising norms. Truth, in this understanding, is a perspective and hence, not total. Truth is deployed as a form of engagement which speaks in terms of survival and victory. In other words, it is truth that is in the service of war.

Žižek next reminds us that Marxism needs to be understood as an ideology where what is universal and objective is understood not in terms of knowledge (the mentalist), but in terms of real conditions. Žižek winds up the philosophical core of the Marxist position by reiterating that the class struggle does not create an obstacle to the universal and objective understanding of history, except by limiting (or contextualising) that understanding to material conditions. Remember Žižek’s reasons behind the Taliban takeover: war and corruption. Is political corruption (before the Taliban took over Afghanistan) a material ground for revolutionary praxis? No, it merely serves the argument for better governance.

The end of American hegemony in Afghanistan will worsen the country’s internal war. Between a shoddy experiment with democracy and the Taliban’s warlord-ism, Žižek’s revolutionary wisdom is to side with the latter.

I am not saying we don’t need western knowledge to understand our world. I am rather saying that western intellectuals need to understand the political culture peculiar to the non-West, critically assess its internal challenges and note its many histories of difference. They need to get more acquainted with intellectual resources from within our locations before turning us over to western knowledge, as its (im)proper subjects.

The idea of truth that Žižek smuggles into his understanding of the Taliban takeover, via Foucault, is a specific kind of truth in a specific situation. It is truth in the service of war. If truth is an argument, or is possible to be made as such, it is lost in war. If war itself is considered truth, then we have pushed truth to a place where Žižek‘s terms of survival and victory can only be measured in terms of eliminating others. In other words, the establishment of truth – partial and supposedly perspectival – can only be possible when the other is destroyed.

It is only in the death or total occupation of the other that truth can prevail. There is no space for Marxism here. Marxist politics is about the elimination of conditions, not people. The elimination of people is fascism.

In his conversation with Ukrainian director, Sergei Loznitsa, who made the documentary on Stalin’s death, State Funeral (2019) the Italian filmmaker Pietro Marcello said, “Stalin was basically a fascist…[who] believed that the only anti-democratic way to rule was through the police.” Same goes for the Taliban, wielding guns in streets and neighbourhoods, hunting down people who don’t cater to their idea of society or religion.

War brings with it a false sense of totality. Just because war is specific to a people and region does not mean some great liberation from the universalising norms of western modernity is taking place. In fact, such wars reveal the worst symptoms bequeathed by western modernity.

Žižek feels that liberal individualism and its commitment to a materially ungrounded idea of universality will dismiss any ideology or force that inspires its adherents to risk lives as “irrational”. Forget what liberals may think. The point is that any violence that aims for state power has purely rational considerations.

Even though he acknowledges that Marxist theory cannot give us a “convincing” explanation for the Taliban phenomenon, Žižek doesn’t lose heart and takes recourse to Freudian territory, imaging the return of Taliban as the return of the “repressed” in collective form, which now seeks to challenge western hegemony “in the guise of religious fundamentalism”. He finds it a moment of “emancipatory engagement”.

Žižek’s idea of the “repressed” as a collective form of emancipation against western hegemony is miserably out of place. This “repressed” is the surplus created by that same western hegemony and is hence, invariably and logically caught in the death-traps unleashed by that hegemony. There is no emancipatory potential in any collective expression of solidarity with fascist violence.

This a very interesting vid. I might put it up on Casa Gert.

And Harry Potter IS a truly bad book. Reading it is the equivalent of eating cardboard witha gravel sauce...