Reconciling the Theft of Enjoyment... 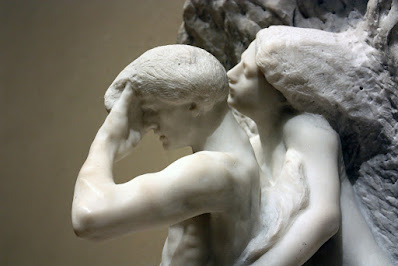 Figured as a thief of enjoyment, the state merely fits into the most common role of the other in the society of enjoyment. In every encounter with the other, I encounter someone or something that seems ready to enjoy at my expense and in my stead. Every interaction is a struggle for enjoyment. Hence, I must take precautions when entering into the social world, guarding myself against the threat that the other represents, This of course militates against civility because civility depends on not viewing the other as fundamentally threatening and on the presumption that both the subject and the other have sacrificed their enjoyment. In the society of enjoyment, civility becomes dangerous. If I act civilly, I risk allowing the other to take my enjoyment from me and expose my lack. However, this is but the beginning of the problem. If viewing the other as a potential thief of any enjoyment has the effect of creating less civil encounters, it has also the ominous effect of producing subjects prone to aggressiveness and violence, and we can see this tendency throughout the society of commanded enjoyment.

Todd McGowan, "The End of Dissatisfaction?": Jacques Lacan and the Emerging Society of Enjoyment
Louise Fradenburg, "So that we May Speak of Them": Enjoying the Middle Ages

This essay explores the significance of enjoyment to medieval studies, and to some of the discontents of contemporary literary and cultural studies more generally. What, to begin with, is the nature of the signifying field in which medieval historiography, as a mode of sublimation, takes place? I use the term "sublimation" to refer to the problem addressed by Freud of how the creation of art and other forms of cultural "achievement" may be understood in relation to desire. The movie Babe will help us to an initial sketch of what is at stake in the relation of the signifier to desire and memory.

Babe is, first of all, a film with a recognizably medievalist agenda. It celebrates love between master and servant (these days, animals have to stand in for peasants), and rural life as scene in which such love might be rediscovered. It expresses distaste for technology, focused especially on communications in the form of the Fax machine, but also recuperates the Fax, as well as discipline, training, technique. These figures recall the master tropes of anti-utilitarian medievalism in the nineteenth century. So does the film's insistent association of meaningless speech with commercialism and disbelief in the remarkable, and its association of meaningful speech with Babe's taciturn but loving farmer- a man behind the times who nonetheless is able to succeed because he recognizes the distinctive gifts of his animals, even when they want to do the work of the "other" (even, that is, when the pig Babe wants to do the work of a sheep dog).

An envious feline "thief of enjoyment" at one point explains to Babe that cats, because they are beautiful, need not be useful, and therefore are not eaten. Pigs, on the other hand, are destined to be food, and this was the fate of Babe's family. This information has a severely depressive effect on Babe's desire to work as a sheep dog for his farmer, and to compete on the farmer's behalf in the upcoming sheep-dog trials. There follows a scene in which Babe has to be convinced that his farmer loves him, that his relation to this other is not merely instrumental. Babe is not persuaded by food. Babe is persuaded that he is loved by the other only when the other produces art for him, that is, sings and dances for...

A Zizekian analysis of abortion rights:

McGowan deals with it in his phenomenal 'Enjoying What We Don't Have'. As you'd expect the psychoanalytic move is to search for jouissance. The conservative obsession against abortion appears to be more concerned with the life improvement it provides to the pregnant woman rather than the ethical arguments for saving a fetus.

Let me run an extreme example. Imagine overhearing a woman nattering to a friend on her mobile on a train saying she was having an abortion because it overlaps with her skiing holiday. How would you feel? Why? I suspect, like me, you'd feel quite angered thinking she was wrong to be so blasé on something so significant.

But isn't the pathological reason for your annoyance that she appears to be able to enjoy the abortion. That is, the abortion gives her the freedom without cost to enjoy life; she is 'stealing enjoyment'. This has some parallel with Lacan saying it is pathological to complain your wife is sleeping with a stranger if your motive is the wrong one.

Jacques Lacan claimed that, even if a jealous husband's claim about his wife – that she sleeps around with other men – is true, his jealousy is still pathological. Why? The true question is “not is his jealousy well-grounded?”, but “why does he need jealousy to maintain his self-identity?”. Along the same lines, one could say that even if most of the Nazi claims about the Jews were true – they exploit Germans; they seduce German girls – which they were not, of course, their anti-Semitism would still be (and was) pathological, since it represses the true reason why the Nazis needed anti-Semitism in order to sustain their ideological position. (Mr Zizek)

And this pathological response is wrapped up with our own misgivings as to our inability to gain pure enjoyment. Zizek gives the example of refugees:

...immigrants appear (or pretend) to be desperate refugees, while in reality they are the spearhead of a new Islamic invasion of Europe. Above all, as is usually the case, the cause of problems which are immanent to today’s global capitalism are projected onto an external intruder. A suspicious gaze always finds what it is looking for: “proof” is everywhere, even if half of it is soon proven to be fake.

The pregnant woman is the scapegoat for our sense of anxiety with the World. If we make her suffer a little, even if being forced to cancel her ski holiday by having to attend an abortion clinic across State lines, then we do our little bit to make our society this little more blissful, a little more in tune with our fantasy of oneness. A little bit closer to our search for jouissance. She is made to sacrifice for the group.

The Mother annoys because she was shameless enough to speak in public about her abortion. Shamelessness is always read as access to enjoyment, a very enviable property. Her reason for the abortion was directly for simple enjoyment (a ski holiday!). Of course, as Zizek relentlessly points out, this impression of enjoyment is almost always false; we can easily imagine that despite her strength to speak of it she may well not be sleeping at night, or had many arguments with her boyfriend about it etc.