Reflections Upon the 'Other' 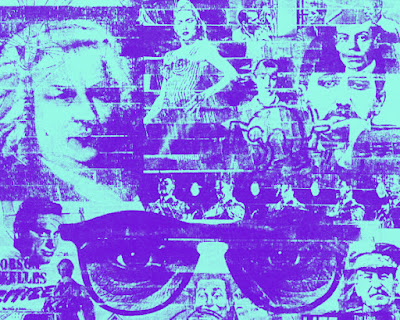 “How can one be a white, heterosexual male, and still retain a clear conscience?”
Let us examine a recurrent feature of American ideology: the obsessive idea that there might still be some U.S. prisoners of war alive in Vietnam, leading a miserable existence, forgotten by their own country. Recently this obsession appeared with re­newed force. An American researcher, working in the archives of the Communist party of the former Soviet Union, produced a “secret” document purporting to identify a far greater number of prisoners than had previously been counted. In the 1980s, the missing POWs idea articulated itself in a series of macho film adventures (Rambo II, Missing in Action) in which a hero under­takes a solitary rescue mission. The under­lying fantasy is far more interesting than the films: “Down there,” far away in the Vietnamese jungle, America lost a precious part of itself, the essence of its potency, and this loss became the ultimate cause of America’s decline and “impotence” in the post-Vietnam Jimmy Carter years. To re­trieve this stolen, forgotten part became an aim of the Reagan-esque reaffirmation of a strong United States.

What the secret document case and the Rambo films bear witness to is the strange logic of the “theft of enjoyment” that forms the very kernel of racism. What holds to­gether a given community can never be reduced simply to the point of symbolic national identification: A shared relation­ship toward the other’s enjoyment is always implied. Structured by means of fantasies, this thing — enjoyment — is what is at stake when we speak of the menace to our “way of life” presented by the other. It, and not the set of so-called white/Christian values that supposedly offer support to U.S. na­tional identity, is what is threatened when white Americans panic because of the grow­ing presence of “aliens,” or when people in another country are scorned for taking away “American” jobs.

National and racial identities are deter­mined by a series of contradictory proper­ties. They appear to us as “our thing” (per­haps we could say cosa nostra), as something accessible only to us, as some­thing “they,” the others, cannot grasp; nonetheless, “our thing” is something con­stantly menaced by “them.”

This thing gives plenitude and vivacity to our life, and yet the only way we can define it is by resorting to different versions of the same empty tautology: that the thing is “it­self,” “the real thing,” “what it is really about.” If we are asked how we can recog­nize the presence of this thing, the only consistent answer is that it is present in that elusive entity called “our way of life.” All we can do is enumerate disconnected frag­ments of the way our community organizes its feasts, its rituals of mating, its initiation ceremonies… in short, all the details of the unique way in which our community arranges its enjoyment.

The way these fragments persist across ethnic barriers can sometimes be quite af­fecting. When Robert Mugabe was asked by a journalist to name the most precious lega­cy of British colonialism in Zimbabwe, he answered without hesitation: “Cricket” — a senselessly ritualized game, almost beyond the grasp of those outside the British Com­monwealth, in which the prescribed ges­tures (the way to throw the ball, for example) appear grotesquely “dysfunctional.”

We always impute to the other an exces­sive enjoyment. He or she seems to have access to some secret, perverse stimulant. What really bothers us about “others” is the smell of “their” food, “their” noisy songs and dances, “their” strange manners. A surplus pertains to each of them. In racist ideology, a second kind of distortion also appears to deform the other: namely, “their” attitude toward work. To the racist, the other is either a workaholic stealing “our” jobs or an idler living on our labor; and it is quite amusing to notice the haste with which one passes from reproaching others with a refusal to work to reproaching them for the theft of work.

In today’s United States, the role of the “thief of enjoyment” is played more and more by the Japanese. Witness the Ameri­can media’s obsession with the idea that Japanese people don’t know how to enjoy themselves. Japan’s growing economic su­periority over the United States is ex­plained by the somewhat mysterious fact that the Japanese don’t consume enough; therefore, they accumulate too much wealth. What America reproaches the Japa­nese for is not simply their inability to take pleasure, but rather that their very relation­ship between work and enjoyment is strangely twisted. It is as though they find enjoyment in their very renunciation of plea­sure, in their zeal, in their inability to “take it easy.”

At the end of this obsessive line of thought is the idea that the only thing that might relieve American fear of Japan is if Japanese people somehow unlearned their ways. Thus the American media report with such evident relief how Japanese are finally learning to consume. And U.S. tele­vision depicts with self-satisfaction how Japanese tourists stare at the wonders of the American pleasure industry. Finally, they are “becoming like us,” learning our way of enjoying…

The logic of the “theft of enjoyment” is by no means limited to reigning “white” ideology. It also lays a fatal trap for those sexual and ethnic minorities who, in a quite justified way, refuse simple integration into the liberal democracy. When, for example, the Nation of Islam advocated African American (cultural, po­litical, economic) self-sufficiency, the un­derlying idea was that, were it not for the white intruders stealing their substance, Af­rican Americans would be able to live as a self-enclosed, harmonious, organic community. It is by no means accidental that this attitude of apartheid was closely linked to the resurgence of anti-Semitism among African Americans.

While Malcolm X might appear to be the clearest example of this point of view, on closer look, his activity bears witness to a far more refined strategy. Recall Malcolm’s notorious answer to the young white liberal who asked him what she could do for the African American cause: “Nothing.” The remark was not a simple refusal of help. The point was rather different: Only by acknowledging that, ultimately, they can do nothing, that the emancipation of African Americans must be their own deed, only by renouncing the false self-blame of whites, which conceals its exact opposite, patronizing arrogance, can whites actually do something for African American emancipation.

We must be particularly attentive to the difference between the “postmodern” racism which now raged around Europe and racism in its traditional form. The old racism was direct and raw: “they” (Jews, blacks, Arabs, Eastern Europeans, etc.) are lazy, violent, plotting, eroding our national substance. The new racism is “reflective,” self-conscious; indeed, it can well assume the form of its opposite, the fight against racism.

For example, how does a “postmodern” racist react to the anti-immigrant outbursts in Germany? Of course, he or she begins by expressing horror and repulsion at the neo-Nazi violence, yet is quick to add that these events, deplorable as they are, must be seen in their context. It seems the events are actually a distorted expression and effect of a true problem, namely, that in contemporary Babylon, the experience of belonging to a well-defined ethnic community that gives meaning to an individual’s life is losing ground. In short, the true culprits are cosmopolite universalists who, in the name of “multiculturalism,” mix races, and thereby set in motion natural self-defense mechanisms. Germany would be a better place without these problems; therefore, it would be best for the immigrants to keep to themselves, or failing that, leave the country. Apartheid is thus legitimized as the ultimate form of antiracism, as a way to prevent racial tensions and conflicts.

Western liberal intellectuals are often caught in a similar, although inverse, trap, in which they believe that to affirm their own indigenous ethnicities is to celebrate a redneck horror, a site of populist proto-fascism. In the United State, the “backward” Polish or Italian communities, with their alleged brood of “authoritarian personalities,” serve as liberal scarecrows, whereas center-left intellectuals hail the autochthonous ethnic communities of the other (communities of African Americans, Puerto Ricans, etc., which may have lurking within them the same kinds of “authoritarianism”). White liberals thus celebrate the political patterns and forms of enjoyment that bond together these other communities, while denouncing their own. Enjoyment is good, on condition that it remain the other’s enjoyment.

The positive expression of this ambivalence is the obsessive attitude that one can easily detect in political correctness: the compulsive effort to uncover ever-new, ever more refined forms of racial and/or sexual violence and domination. (It’s not p.c. to say that the president “smokes a peace pipe,” for instance, since this involves a patronizing attitude toward Native Americans.) The problem here is simply “How can one be a white, heterosexual male, and still retain a clear conscience?” All other positions can affirm their specificity, their particular mode of enjoyment; only the white male heterosexual position must remain empty, must sacrifice its enjoyment.

The weak point of the p.c. attitude is not that it is too severe, too fanatic, but that it is not severe enough. At first glance, the p.c. attitude appears to involve extreme self-sacrifice, an unending effort to unearth traces of sexism and racism in oneself, an effort not unworthy of the early Christian saint who dedicated his life to discovering in himself ever new layers of sin.

Yet all this effort should not dupe us, as it is ultimately a stratagem to conceal the fact that the p.c. type is not ready to renounce what really matters. “I’m prepared to sacrifice everything but that.” But what? The very gesture of self-sacrifice.

When everyone's a racist, nobody is.

When there's nationalist, it's easy to mischaracterize his nationalism for racism.

Unfortunately nationalism and racism often go hand in hand like a horse and carriage.

That was before the age of air travel.

Yeah, air travel put an end to all that! ROFLOL!

You mean an end to nationalism? Yes, globalism facilitated by air travel certainly did that.