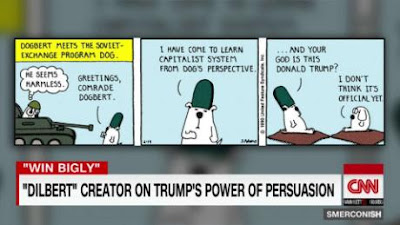 Where politicians see "problems", businessmen see "opportunities".
Posted by -FJ at 9:17 AM

Email ThisBlogThis!Share to TwitterShare to FacebookShare to Pinterest
Labels: Framing

Thank you for introducing us to SCOTT ADAMS –– a most heartening fellow. Appealing for his calm, good humored delivery of common sense –– and also for LACK of chlarisma –– meaning he seems a No-Bullshit, Anti-Phony Baloney kind of guy. HURRAH!

A good motto for the "disadvantaged" and "downtrodden" –– and those chronically in. a quandary –– suggested itself to me as I listened to Adams' second video:

Another way of putting could be:

"No one can eat yupr dinner for you."

You can lead a horse to water, but it's up to HIM to drink.

How's that for a neat twist on an old saw?

As to the first video, which I'm reluctant to accept at face value, I'm not quite sure I understand how "Insult Contests" can –– or should –– displace fact-based well-reasoned argumentation, but the tactic seesm to have WORkED in getting Mr. Trump elected, and so yet another well-worn cliché springs to mind: "Nothing succeeds like Success."

The United States became the great success it was, because of determined PRAGMATISM informed and shaped for the mos part by sound PROTESTANT CHRISTIAN principles. [By the way you don't have to make a public avowal of fervent beief in any particular SECT of Christianity, nor do you have to go to church and assume public shpw of "piety" to predicate your life on Christian PRINCIPLES. Acting with integrity, and cultivating empaty and a charitable approach to others wherever and wherever ossible is sufficient. "Pharisaical "Chrstians" have done a great disservice to our Lord and Master, and our Savior, jesus Christ.]

I have come to believe after decades of earnest soul-searching that simply following The Golden Rule –– REGARDLESS of how badly –– or how well –– others treat you –– is the best possible way we could hope to conduct ourselves as we sgtruggle to hack our way through the thorny jungles, arid deserts, and patches of quicksand that inevitably constitute much of what we must confront in this earthly life.

"Let all bitterness, and wrath, and anger, and clamor and evil speaing be put away from you with all malice. And be ye kind one to another, tender-hearted, forgiving one another, even as God, who for Christ's sake hath forgiven you."

Any philosophy" that encourages and fments envy, resentment, ingratitude, bitterness and a burning desire to "get even" is –– let me not equivocate –– such thoughts are plainly EVIL.

I used to really enjoy the Dilbert strip, back in the day. Scott Adams would appear to have a "second career" on YouTube now with his videos. I "follow" him now and have watched a few. I also liked his recent one on the "placebo effect". I think he may be on to something. ;)