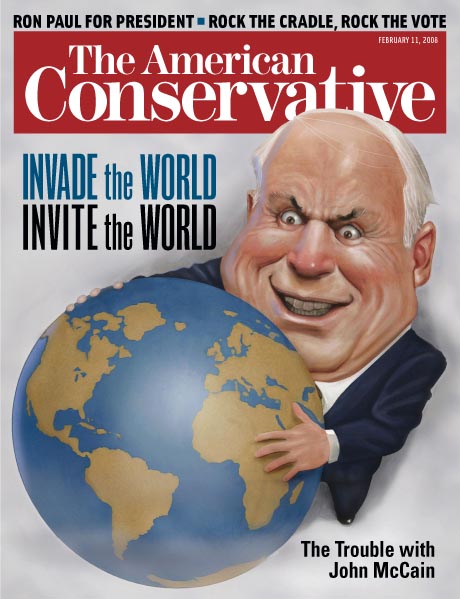 Somebody needs to explain to me the purpose of Meghan McCain in this world...

John McCain's only virtue was that he was not Jewish.

Unfortunately he didn't die soon enough to save us from the curse of Obamacare.

The "curse of Obamacare" remains because the far left imbecile Trump changed the narrative from repealing Obamacare to replacing it with something (when repealing it was all that was needed) and campaigning to dissolve any effort that would repeal Obamacare without replacing it.

Meghan exists to remind us all how much we don't miss her Dad.

I just saw an interview on C-Span with Kay Coles James, current president of the Heritage Foundation. I found her a most impressive lady.

Are any of you familar with her and the work she’s done as a Black Conservative for several decades?

I regret to say I’d never heard of her before 5:00 AM today. I can’t blame myself for that, because, as I’m sure yo realize, the emphasis today is in all the WRONG people. Thanks to the all-pervaisv influence f Cultural Marxism we have lived for several decades in a culture where Virtue is usually given short shrift.

If you don’t know Kay Coles James, you probably should make a point of looking her up.

It takes LOT to impress ME favorably, and this lady just bowled me over with her eloquence and beautifully articulated Common Sense Conservatism.

HERE ARE ONLY FOUR OF thE MANY GOOGLE REFERENCES TO KAY COLES JAMES. IT'D BE A GOOD IDEA TO CHECK 'EM OUT.

Kay Coles James (born June 1, 1949) is an American public official who served as the director for the United States Office of Personnel Management under ...

Kay Coles James | The Heritage Foundation
https://www.heritage.org/staff/kay-coles-james
Mrs. Kay Coles James has an extensive background in crafting public policy and leading in nearly every sector of America's economy. She has worked at the ...

Never heard of her... but she is all over YouTube.

LCJ s now 70. I saw her on C-San ths morning. She ShOULD be verb famous, CELEBRATED, LAUDED, and APPLUDED internationally, BUT she's a (GAP!) conservative who supports President Trump with a few minor reservations, and gven that, it's a wonder she's still ALIVE in the Natiin's CrapitAll.

I din't even realize she was black until more tan twenty -minutes into the interview.

I tried to cry and paste the C-Span interview into myblog,but C-Span is not like YouTube. THey're happy to let you see anything they've ever broadcast, but, apparently you have to do it THERE –– or so it seemd to tech-challenged me.

It was a great TREAT t watch somethingthat gave hope and made you fel more alert and fully alive, instead of the usual diet of Soul-Deadening CLAPtRAP we're fed all the time.

I think MM is a borg, designed to make Woopey Goldberg half-intelligent.

Franco: John McCain's only virtue was that he was not Jewish.

So much for Franco loving the good ones and hating the bad ones, eh, Minus?

This treasure trove of wisdom was just discovered at Who' Your Daddy? It was a bii like falling into a cesspool and coming out with a gold watch.

WHOOPS! The KING of HALITOSIS has arrived.

No wonder the place suddenly stinks like a rat-infested sewer! O WOE is ME! I've developed a nauseous headache!

It's been Geat Fun, but It Was Just One of Those Things.

McCain was a "good one"? Not in my book.

I don't believe ANYONE here said "McCain was a Goon One."

I believe he was the closest thing we've ever had to a TRUE "Manchurian Candidate."

I spotted old Rabbit-Face as "A Wrong 'Un" more than twenty years before he became a candidate for POTUS.

You missed the point, Franco.

Dervy said: "So much for Franco loving the good ones and hating the bad ones, eh, Minus?"

I've often said that there's nothing "racist" with distinguishing the "bad Jews" from the "good Jews"... so long as you don't hate "all Jews".

Because his point is that you must hate ALL Jews (and are therefore a racist).