Long Live the Emperor Joshua A. Norton I AND His Successor, Donald J.Trump! 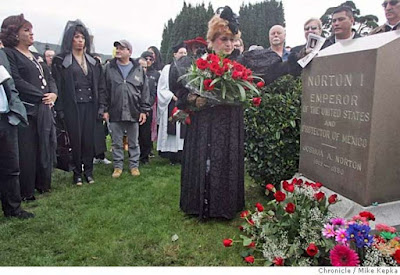 Much Madness is divinest Sense ––
To a discerning Eye ––
Much Sense ––- the starkest Madness ––
’Tis the Majority
In this, as all, prevail ––
Assent –– and you are sane ––
Demur –– you’re straightway dangerous ––
And handled with a Chain ––

"Insanity is the only sensible response to an insane world."

Not a genune quotatiin, but a reconstruction by a doubtless faulty memory. The gist, howeer, is presented correctly, I believe.

I don't beileve, however, that President Trump is either quixotic or in any way mad.

I think he may very well be THE sanest person in all of Washington, DC.

Our president is a model of Courage, Tenacity, tremendous Strength of Character, and far-seeing Vision.

I wish it were possible for him to serve a shot) term as our King invested with absolute power.

I'd love to see what he could accomplish in six years unchallenged, untrammeled, unhobbled, unrestricted.

Withit the childish, irrespnsbe power-mad machnatiins of the Left –– and the utter fools we call RINO's on the Right –– I'm fairly certain President Trump could right the nation, and set it on a highly desirable, salubrious, productive course.

Such power, however, should NEVER be given to ANYONE for more than a few short years, because –– as we've always been told –– "Power Corrupts, and Absolute Power Corrupts Absolutely."

Since our "elected represeantaives are worse than useless, return to a modified form of MONARCHY might very well be the best way to go –– for a short while at least.

Never attribute to malice that which can be explained by incompetence. Trump keeps catching controversy by word and deed because _________.

I'm guessing there's a small clinging residue of rationality within Trump that wishes he could go back to the 1980s and stop himself from snorting so much cocaine.

How enervating 'tis to find
A human born without a mind!