Amnesty says at least four children among those killed by state forces since start of protests over woman’s death in custody
At least 450 people have been arrested in Mazandaran, a northern province of Iran, during the last 10 days of protests, according to the province’s chief prosecutor.

Protests sparked by the death in police custody of 22-year-old Mahsa Amini have spread across the country. They have been met with internet shutdowns and violent repression.

The official death toll in the unrest is 41, while human rights groups say the true number is more than 75.

Amnesty International said at least four children had been killed by state forces since the beginning of the protests. It described a “harrowing pattern” of “deliberate and unlawful firing of live ammunition at protesters”.

Heba Morayef, Amnesty’s Middle East and north Africa director, said: “The rising death toll is an alarming indication of just how ruthless the authorities’ assault on human life has been under the darkness of the internet shutdown.”

Iranian officials said on Monday that more than 1,200 people had been arrested as the dragnet against the protests widened. Demonstrators took to the streets again on Monday night in Tehran and elsewhere, witnesses told Agence France-Presse.

Video filmed from several floors above street level, purportedly in the city of Tabriz, showed people protesting to the sound of tear gas canisters being fired by security forces, in images published by Oslo-based group Iran Human Rights.

The group said at least 76 people had been killed in the crackdown.

Amini was visiting Tehran when she was arrested by morality police who took issue with the way she had veiled her hair. While the police maintain she died of natural causes, her family say she was tortured and killed.

“During the journey to the police station she was tortured and insulted,” Amini’s cousin Erfan Mortezaei told Sky News. “She suffered a concussion from a blow to the head. There is a report from Kasra hospital [in Tehran] that says effectively by the time she reached the hospital she was already dead from a medical point of view.”

Despite efforts to stop Iranians from accessing apps such as Instagram and WhatsApp, videos of people allegedly killed during the protests have been spreading on social media.

Parents of young people killed during the protests have expressed disappointment at the response from the international community. “People expect the UN to defend us and the protesters,” said the father of 21-year-old Milan Haghigi, quoted by Amnesty International. “I too can condemn [the Iranian authorities], the whole world can condemn them, but to what end this condemnation?”

Videos showed protests on Sunday night in Tehran and cities including Yazd, Isfahan and Bushehr.

The Norway-based Kurdish rights group Hengaw said a protest was held in Amini’s home town of Saqqez despite a heavy military presence, and there were reports of a 10-year-old girl being taken to hospital after she was shot in the northern town of Bukan.

Other reports said students at three universities in Tehran were refusing to attend lessons.

Agence France-Presse contributed to this report

This article was amended on 26 September 2022. An early version referred to a viral video that reportedly showed a young woman, Hadis Najafi, tying up her hair before joining the protest in which she was killed by state forces. This detail has been removed after another woman told the BBC’s Persian service that she was the protester in the video, not Hadis Najaf 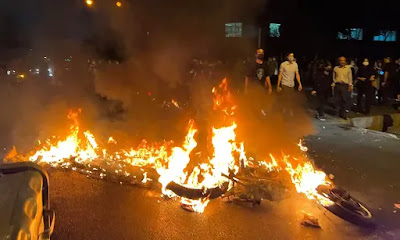 Posted by -FJ the Dangerous and Extreme MAGA Jew at 5:04 PM

i hope persia not waiting on us goobermont do right thing

What is the "right thing" for Iran, anyway? For Moqtada al Sadr to return leadership of Shi'a Islam out of Qom and back to Najaf and unite the Iraqi and Iranian Ummahs under a more righteous and legitimate heir of Mohammed.

Where's the "real" Mahdi when you need him?

The failure to embrace the inherent and inevitable paradoxes of everyday life is accompanied by a complete misapprehension and incompetent misapplication of irony. - Professor Graeme Cockfoster, Univerity of Edinburgh

Do you agree with this? Is this guy trying to beat out Zizek for some arcane award?

What is wrong with our social discourse?

Is it all just about power, structure, capital and hegemony?

"The move from a structuralist account in which capital is understood to structure social relations in relatively homologous ways to a view of hegemony in which power relations are subject to repetition, convergence, and rearticulation brought the question of temporality into the thinking of structure, and marked a shift from a form of Althusserian theory that takes structural totalities as theoretical objects to one in which the insights into the contingent possibility of structure inaugurate a renewed conception of hegemony as bound up with the contingent sites and strategies of the rearticulation of power."

The capitalist discourse does seem to have replaced the Masters... just sayin'...

It's all become about the Benjamins.

As Nietzsche might say, "Everything is Will to Power".

-FJ, not Professor or Doctor. A simple but perhaps not so humble engineer in "management".

Power coupons. You either have them or you owe them.

I will see you hang'd like clatpoles ere I come any more to
your tents. I will keep where there is wit stirring, and leave the
faction of fools.

Farmer J you should know better than trying to talk sense at that leftwing hate site shawkenawe. She holds back good comments until she can take three hours to come up with a zinger and posts it right after yours. They are all one big blob of leftwing groupthink.

One blithering idiot even claimed the founding fathers were leftwing progressives! Can you believe that? What imbeciles.

Which slaveowning left prog are we talking about?

Well Catty, the point is to get her to censor my responses, thereby self-validating her dialectical inferiority.

Progressive Eruptions is a hermetically sealed bubble of groupthink lefties huffing their own farts!

Whatever floats their boats...

Imagine being so triggered by opposing views that you begin a harassment campaign.

I am not a Trump supporter and probably disagree with 55 to 60% of stuff posted on AOW's blog, but never saw a need to spam her blog. Who has time for that?

I heard from sf. They weren't attacked. Everything's fine there, they're "on hiatus".

"Philosophy is the translation of Eros into Logos" - Byung-Chul Han

Life is a chemical System that uses energy to keep itself from reaching chemical equilibrium. Equilibrium is the situation in which chemicals no longer have a tendency to react over time.