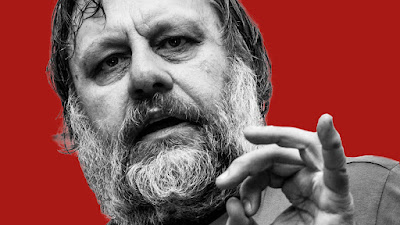 Slavoj Žižek: "Globalization after the war in Ukraine" (translated)

Europe is losing a unique opportunity to combine non-military pressure on Russia with doing something good for our environment. Not to mention the key fact that rejecting Russian gas would open up the prospect of a different globalization that we need today more than ever.
Ne explétif is an example of French words which "have no meaning on their own, but are used for syntax or pronunciation" (they can also be found in some other languages, such as my Slovenian). They appear “most often in subordinate sentences, after verbs with some negative connotation (to fear, avoid, doubt); their function is to emphasize the negative aspect of what precedes them. For example, Elle doute qu'il ne vienne ("She doubts that he / will / will not come") or Je te fais confiance à moins que tu ne me mentes ("I trust you until you / you lie to me").

Lacan invokes ne explétifto explain the difference between a wish and a desire: when I say "I'm afraid there is no storm," my conscious wish is that it should not be. I am afraid of the storm, but my real desire is inherent in this added "no" - I fear that the storm will NOT come, I want it with all its violence. Does exactly the same fit with the fear in Western Europe that cutting off the gas supply from Russia would lead to a catastrophe? "We are afraid that the disruption of natural gas supplies will not result in a catastrophe!" But what if this fear is fake, because in fact - thank Eric Santner for this thought - we are afraid to consider the possibility that the interruption of gas supplies will NOT cause any catastrophe? That we could adapt quickly to this situation? Because what then,

Reading this ne explétif literally, acting in accordance with this "no" is perhaps the greatest act of political freedom today. In other words, what if the idea that Russia promotes that when Europe stops buying gas from Russia it will commit suicide only works because it is based on our apathy and our inertia? Following this line of thinking, perhaps our perspective is, as Kurt Vonnegut put it, "going down in history as the first society that did not save itself because it would be cost ineffective"?

Or, as Stephen Fry stated : “When Russia invaded Ukraine, the West responded with sanctions, arms deliveries, but also loads of moral support. But here the line has been drawn. Europe (especially Germany) continues to buy Russian gas and oil in huge amounts, practically financing Putin's bloody war campaign. He is not prone to profound sacrifices, including cutting fuel consumption or potentially risking job losses. And let's forget about the no-fly zone. "

True, we hear in the media about the many billions in aid Ukraine receives from us, but Russia still gets a lot more for the gas it supplies to Europe. No wonder, since in Germany business owners and trade unions are jointly opposing the boycott of Russian fuels ... Europe is losing a unique opportunity to combine non- military pressure on Russia with doing something good for our environment. Not to mention the key fact that rejecting Russian gas would open up the prospect of a different globalization that we need more than ever today - neither Western, liberal-capitalist, nor Russian-Chinese, anti-Western authoritarian globalization.

Russia is trying to dismantle not only a united Europe, but is trying to present itself as an ally of the Third World in the fight against Western neocolonialism - the attack on Ukraine is presented as an act of decolonization. Russian propaganda skillfully manipulates the Third World's bitter memory of how it has been treated by Western powers: wasn't the bombing of Iraq worse than the bombing of Kiev? Russia combines this vision of itself as an agent of global decolonization with discreet (and often indiscreet) military support for local dictators in Syria, the Central African Republic, etc. the US dollar and the euro for the status of global currencies.

We should not underestimate the effectiveness of this propaganda: when Ukraine proudly proclaims that it defends Europe, the Russian answer is yes, and we are defending all the past and present victims of Europe. We are already seeing first results in Serbia: according to recent public opinion polls, more than 60 percent of voters are against Serbia joining the European Union.

If Europe wants to maintain its chances of victory in this ideological war, it must change its model of liberal-capitalist globalization - it will not succeed without it. If it does not, it can survive, but only as an island ("fortress") surrounded by enemies that will slowly infiltrate it.